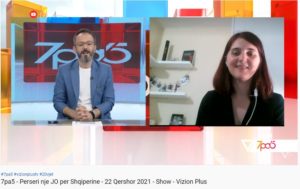 On June 22, 2021, Nirvana Deliu – Policy Researcher at EMA was invited to VizionPlus to comment on the postponement of the decision for Albania and Northern Macedonia. She stated that Bulgaria’s veto may lead to a separation between these two countries. Deliu declared that EU’s approach to enlargement should be seen after September. Regarding the UN approval for Albania as a non-permanent member, she explained that it confirms our country’s position as as an ally and a factor of stability in the Balkan region.

You can find the full interview below: Again a “NO” as response to Albania