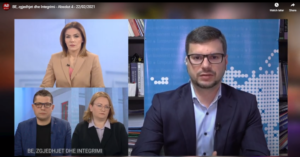 Gjipali: “It is unfamiliar for the integration process to be conditioned by internal political elections”

Gledis Gjipali, Executive Director of EMA on February 22 was invited “Absolute 4” where he spoke about the practical opening of negotiations and stated that the EU is not in a hurry because among other things is waiting for the solution of the dispute between Bulgaria and Northern Macedonia. After the observing the elections in Albania and the outcome for Northern Macedonia EU will deliver its conclusion for both countries simultaneously. Moreover, Gjipali asserted that even after the First Intergovernmental Conference, Albania has many tasks to carry out to consolidate its path towards EU.