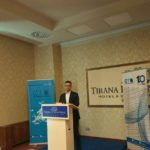 On 12 May 2017, European Movement Albania, with the European Commission’s supports under the Jean Monnet Programme launched the European Integration and Negotiations Academy (AIEN), that will organize a series of workshops on enhancing governance of EU policies and preparation of Albania EU Negotiation Process during the period from May 2017 through February 2018. There would participate more than 60 persons from different fields of expertise and sectors of economy.