Evolving or Revolving: Institutional reforms and democratic legitimacy in Albania, Kosovo and Montenegro 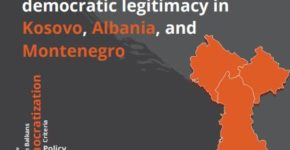 The European Union accession is generally believed to be closely related to democratization, especially in the Western Balkans, where the EU has been one of the main driving forces of democratization in the region. This research paper aims to offer a comprehensive policy review of the already established reforms and examine the extent of the […]
Read More

Policy Brief: Posting of Workers in the Western Balkans: The Case of Albania 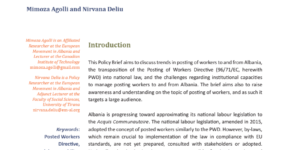 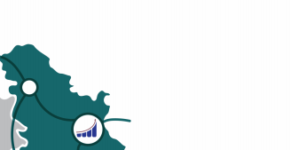 The goal of this study is to contribute in the documentation of progress that Albania, Kosovo and Serbia have achieved in implementing the commitments taken in framework of the Connectivity Agenda. It seeks to draw the attention on the need to develop monitoring mechanisms at regional level, so as to ensure a timely implementation of […]
Read More

Policy Study: Instrument for Pre-Accession Assistance and the countries of the Western Balkans, June 2018 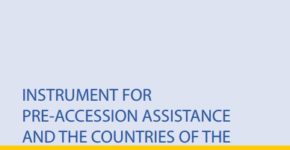 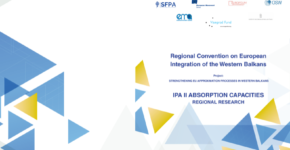 This Regional research is result of a yearlong work on understanding, researching and analysing IPA II absorption capacities in three countries of Western Balkans with the guidance and expe- rience of Visegrad group countries. Within the framework of the Regional Convention on European Integration of Western Balkans, supported by International Visegrad Fund on one side […]
Read More

Policy Study: Migrants and Asylum Seekers Rights in Albania, May 2017 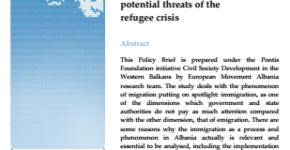 This Policy Brief is prepared under the Pontis Foundation initiative Civil Society Development in the Western Balkans by European Movement Albania research team. The study deals with the phenomenon of migration putting on spotlight: immigration, as one of the dimensions which government and state authorities do not pay as much attention compared with the other […]
Read More 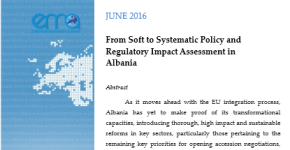 EMA has the pleasure to share with you the Policy Study: From Soft to Systematic Policy and Regulatory Impact Assessment in Albania. This publication has been produced with the assistance of European Fund for Balkans, in framework of Think and Link Programme. The study analyses the state of affairs in the policy and legislative process in […]
Read More 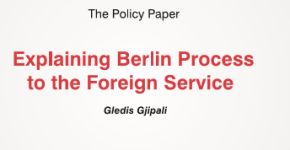 EMA has the pleasure to share with you the Policy Paper: Explaining Berlin Process to the Foreign Service conducted by Mr. Gledis Gjipali, Executive Director of EMA as part of a project financially supported by the Swiss Embassy in Albania. This paper aims to explain the political, economic and social context of the Berlin Process and  outlines the […]
Read More

Policy Brief: EU conditionality as a transformative power in the case of the Albanian Public Adminstration, July 2015 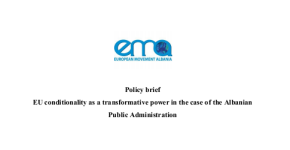 EMA has the pleasure to share with you the Policy Brief: “EU Conditionality as a transformative power in the case of the Albanian Public Administration”. This policy brief has been prepared in the frame of the TRAIN Programme 2015 (ThinkTanks Providing Research and Advice through Interaction and Networking), which is supported by the German Federal […]
Read More

Policy Study: Civil Society in the EU Integration of the Western Balkans, October 2014 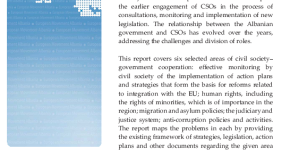 EMA has the pleasure to share with you the policy study: “REPORT Civil Society in the EU Integration of the Western Balkans” The dynamics in the process of accession require  the earlier engagement of CSOs in the process of  consultations, monitoring and implementation of new  legislation. The relationship between the Albanian  government and CSOs has […]
Read More