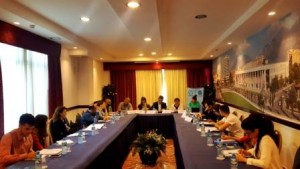 European Movement Albania in partnership with Slovak Foreign Policy Association, with the support of Minister for Innovation and Public Administration organised on 24 May 2016 the fourth session of Working Group II with the topic: “Cyber Crime and Cyber Security in Albania: New Challenges in the framework of EU Integration process”.

Mr. Gledis Gjipali, Executive Director of the European Movement in Albania made a detailed presentation about the objectives of National Convention on EU integration during the first year of its implementation. Convention had in focus four most essential chapters of EU-Albania negotiations process, including Chapter 24 of Working Group II. He made a distinction between the features of the two working groups treating the chapters 23-24 as fundamental for whole the process, and two other working groups which aim mostly to reach the standards in the fields such as agriculture and environment. Cyber Security is a critical issue included not only in chapter 24 as part of national security, but also is in covered by Chapter 10 (Information Society and the Media). Regarding cyber security in Albania, this is a new field which brings new challenges and threats through digitalization and connectivity. Thus, to Mr. Gjipali is substantial the enforcement of the capacities in administrative field, as well the process of updating to inform the interest groups should be ongoing.

Mrs. Vilma Tomço, Director of the Department for European Digital Agenda, Minister of Innovation and Public Administration explained the activity of the Minister of Innovation towards the EU Integration process. Agenda of Digitalization nears us more with the EU therefore the reformation of public services has started, changing the concepts for the future. Digitalization of the public services will upgrade the quality of public access, but she underlined that together with positive developments new challenges wait us ahead. One of the issues is the finalization of an efficient and faster cyber security. Mrs. Tomço noted that Minister of Innovation is opened for new proposals, further suggestions and collaborations with all the actors concerned in the field to give their contribution and support toward the digitalization process.

As a representative of the Ministry of Innovation and Public Administration, the Director of Electronic and Postal Communication,Mrs. Irena Malolli, shared her expertise with the participants discussed about the legal framework in Albania and law implementation, emphasizing the challenges needed to deal with during the digitalization process. Cyber threats and crimes remain an obstacle that should be fought in a recurring way and the strengthening of capacities and relevant infrastructure is a must. Regarding Albanian legislation on Cyber security Mrs. Malolli described it as a whole and complete, despite the fact it is new. The Legal
framework it consists of Constitution of Republic of Albania, International Conventions or other international agreements, as well as the so called ‘soft laws’, which are linked with ethical and rules that regulates manners. After mentioning the long list of laws adopted in Albania, she emphasized the first problem connected with these laws which is the fact that they are less known and difficult to be grasped by the public. Another challenge is the process of updating of the legislation, due to the fact that the field they cover is dynamic and the development is fast and continuous.

Mrs. Jona Josifi , Executive Director, National Agency for Computer Security (ALCIRT) gave a general picture on the activity of the agency she directs and its achievements. One of the main tasks of the institution is the systematic supervision of digital subjects and registering of all cyber incidents and the procedure of threats reporting by the citizens. Cyber Security is fundamental on offering public digital services due to their interconnection feature of different sectors, that makes easier for a threat of one of the sectors to affect all the system. The draft-law on Cyber Security includes two key points: 1. Establishing the National Authority on Cyber Security and 2. Creating an infrastructure consisting of critical information and sectors. Mrs. Josifi underlined the need of cooperating with EU authorities regarding the list of indicators about different sectors and services assessed as critical, but she explained that this list should be adapted based on Albanian context and its priorities, meaning so that some indicators that are not available in Albania should be cut off and some others such as public security should be added to the list.

Mr. Donald Shtrepi, Director, Information Technology and Applications Department, Electronic and Postal Communication Authority (AKEP). This institution is based on Law 99/18 and many other legal acts and regulations, on security and information integrity. What is important to Mrs. Shtrepi is the partnership AKEP has with ENISA (European Network and Information Security Agency). Some positive developments have been achieved in the electronic communication sector such 1. Fulfilling a detailed report regarding the security, the concerned subject offers, 2. All the information is included in a whole document including many specifications, 3. The awareness of the subjects regarding the guarantee of the security has been increased during past years, 4. AKEP has started the inspection process of all enterprises and is expected that the next step would be the revision of all information collected.

Mr. Robert Bohunicky, Expert, Criminal Police Bureau, Ministry of Interior Slovakia during his presentation explained in details the legal framework on cyber crime in his country and the structure established to fight against that threat. According to Mr. Bohunicky the approximation of legislation with the EU acquis is essential as well as the cooperation with the European agencies, other NGO-s or interested actors in the field. One peculiar feature of Slovak law is that a penal action in cyber field can be convicted from 6 months to 10 years, for those crimes considered as a high risk. He underlined the importance of trainings and increasing of the
capacity as a key point to upgrade the efficiency and to boost the performance against cyber threats.

Part of the panel were two specialists from the Sector on Investigating Cyber Crimes, General Directory of Albania, State Police,Mrs. Suela Bonjaku & Mrs. Luljeta Ismajlukaj. During their speech they tried to give a comprehensible description of the cyber threats, typologies of cyber offenses and what kind of penalties State Police has conducted. In the Penal Code of RA are listed 17 penal actions in the cyber field based also on Budapest Convention. One positive element is the increase of the number of specialists from 3 that were in the beginning now they are 10 specialists. It is important as well to mention the fact that there had been a good cooperation between Prosecutions on conducting joint trainings between police officers and prosecutors. According to Mrs. Ismajlukaj, 132 penal actions were conducted during 2015 while 34 subjects are judged in a free manner and 15 are arrested. The most common penal actions include computer counterfeit, unauthorized access to a computer system, unauthorized capture of computer data, payment card fraud, child pornography and cyber-terrorism. It is important to emphasize the good cooperation with international institutions such as Europol or Interpol, while the exchange of information is evaluated as an essential element due to the fact that the most cases of cyber crime are connected directly with the organised crime.