European Movement Albania, in collaboration with Balkans Policy Research Group (BPRG) and European Movement Novi Sad, Serbia, supported by Western Balkan Fund has organised in Tirana on 22 February 2019 the Regional Forum “Education and research in Western Balkan Region: An assessment of countries’ experiences and their performance in EU funded programmes” with case study Albania, Kosovo and Serbia. This Forum has gathered participants from state institutions, academia and major universities, research institutes, non-governmental organizations and think tanks not only from Albania but also from Kosovo and Serbia.

The activity was greeted by Mr. Gledis Gjipali, Executive Director of the European Movement in Albania who among other things emphasized the importance of this study on analyzing the situation of Education and Research in Albania,  as well as to assess the regional cooperation in these areas. He said that countries like ours that are still developing, need to work together to cope with the challenges that they face in the field of scientific research.

The greeting speech was also held by the Executive Director of the Western Balkans Fund, Mr. Gjergj Murra, who congratulated the researchers for their work and emphasized the importance of scientific research in the Western Balkans to further develop these countries socially and economically. Mr. Murra said that WBF would always support new researchers because they have the vision and willingness to improve the development of their countries.

Panel I  :Discussion on the main findings of the Regional Research

Present at the event was the Deputy Minister of Education, Sport and Youth in Albania, Mr. Redi Shtino. Mr. Shtino during his speech was focused on the European Perspective of Higher Education and Research in Albania. He explained the new law on research that is expected to be adopted soon, and emphasized the fact that this law will  provide a new developmentto Albanian’s Science. He also stressed that there is a gap between scientific research and market in our country, while suggested that all studies and research results should be used by local businesses and also by public institutions. Moreover, Mr. Shtino also emphasized the fact  that the financial contribution in this area provided by the government is very large, compared to what research offers back for the development of the society in the country. 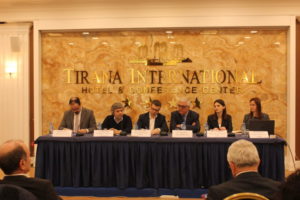 During the Panel I of the Regional Forum, the main findings of the Regional Study “Research, Development and Education in the Western Balkan Countries” were presented, which analyzes the current situation regarding the capacity to absorb EU funds for education, research and science programs in Balkan countries, mainly in Albania, Kosovo and Serbia.

The expert of the research on the Albanian case, Mrs. Elda Zotaj, from the European Movement in Albania during her presentation was focused on the challenges of Albania and the importance of scientific research for the development of the country. She explained that the study came as a necessity to assess and analyze the results achieved so far in absorbing EU funds dedicated to research, education and technology in Balkan countries and attempts to carry out a comparative analysis of WBC absorption capacities and capabilities to EU funds for dedicated education and science programs such as: Erasmus + (KA1, KA2, Jean Monnet,); COST; Horizon 2020 and MSCA. According to the researcher, the problems lie with the lack of financial and human resources to support reforms; there is not adequate infrastructure capacity of HEI research units; it is evidenced a limited cooperation – weak network and low exchanges with universities in the region or EU countries. She suggests that there should be a division of academic staff whether they have more a teaching or a research profile.  She highlighted the need to financial support for scientific publications, scientific conferences, scientific congresses and scientific symposiums for researchers.

Meanwhile, the experience of Kosovo that was similar to our country and it was presented by the researcher Mrs. Gresa Statovci, from the Balkans Policy Research Group. According to her, scientific research in Kosovo is mainly funded by the government, yet the Kosovo government spends on scientific research only about 0.1%, while the law predicts about 0.7%. Mrs. Stratovci suggested that a transparent information system should be established on scientific research. Then she suggested the creation of a working group to launch and manage the collaborative research and development programs as well.  The development of a needs assessment plan for laboratories and modern equipment are needed to carry out up-to-date experiments. Other recommendations from the study include: creating a brain-gain fund and a program to attract Kosovar researchers working abroad, as well updating the criteria for doctoral students and professors on scientific research.

The Serbian representative, Mr. Nikola Bozic, Director of the Petnica Science Center Program during his speech focused on the financing and progress of the Serbian scientific research which already heads the region. According to him, some  of theprojects in Serbia funded by EU were recognized by the European Commission as best practice examples, while others have won international or regional awards. Mr. Bozic said that Serbia has a good level of preparation in the field of scientific research and some progress has been made in terms of innovation policy and participation in EU research programs. 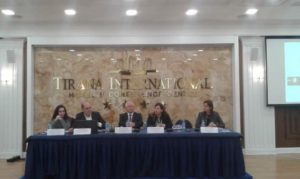 During the Panel II the first to talks, was Mr. Robert Dumi, General Director of the National Agency for Scientific Research and Innovation (NASRI) who explained how the funding of research in Albania occurs and which is the role of the NASRI on the development of Albanian science. He said that NASRI supports, monitors and evaluates programs and projects in the fields of science, technology and innovation in the country. Together with the implementation of its mission, NASRI cooperates with other ministries and institutions in the implementation of the Strategy of Science, Technology and Innovation and provides financial support in line with the priorities set by the Council of Ministers.

Then the representative of the Ministry of Education, Sport and Youth Mrs. Ingrid Jushi presented the government’s reforms in this area and the challenges it is facing. She also said that the Albanian government has a specific monetary fund to sponsor scientific research specifically for young researchers. Also, the Ministry of Education, Sport and Youth supports with academic advises every researcher who wants to do a market-oriented study and research in the country

Mr.Lekë Sokoli, Deputy Rector, ‘Aleksandër Moisiu’ University, Durrës (UAMD) talked about the challenges of the Public Institutions of Higher Education in absorbing EU funds. He informed about the level of scientific research in public institutions in our country and shared information especially for the ‘Aleksandër Moisiu’ University in Durrës. He mentioned that there are some projects that the university is implementing, that have been funded by the EU.

Mr. Sokoli emphasized the fact that scientific research continues to be a weak point for our country and this has led to the slowdown of economic and social development. He also expressed his reserves about the new law on higher education, saying that this infringed the development of science, as public universities would have very difficult in self-financing. Finally, he claimed that it is necessary for the Ministry to reform itself by having a deputy minister for science.

Mrs. Elona Karafili, Deputy Rector, Polis University discussed the role of Private Higher Education Institutions in the field of scientific research. Like Mr.Sokoli, she had the same concerns and remarks regarding the law on High Education, yet she said the situation of financing is less problematic in private institutions, as they have more funding facilities. Moreover, she was concerned about the fact that education reforms implemented in various developed countries are imported into our country without any filters and assessment, and then when it comes to  the practice it is difficult to implement them.

Discussions were also held by other guests, with emphasis on not efficiently utilizing scientific research from public institutions in the country. The Albanian scientific research is not used by local businesses or by the policy-makers when drafting long-term policies or strategies. Moreover, our country bases 90% of the economy on a small business, meaning that the financial capacity that they can offer to research projects is really small as well. It is essential for the state to intervene and fund the universities because self-financing is not efficient and is almost impossible for such institutions to proper function and implement research projects.

This workshop has gathered about 20 academy and research representatives from Albania, Kosovo and Serbia. The primary objective of this session was to provide information on funding opportunities and programs at European and regional level, as well as provide an opportunity to exchange experiences and best practices and establish contacts for future cooperation between them. 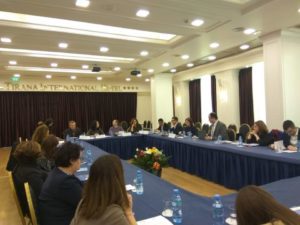 Firstly, Mrs. Dafina Beqiri from the Western Balkans Fund, provided participants with information on the mission and main purpose of the WBF organization. Moreover she claims that WBF intent to support projects from the Western Balkans, that have primary objective to develop various sectors of society and economy, based on regional cooperation between them. Also, based on her experience as recipient and fundraiser for projects, she provided some tips to keep in mind when drafting project proposals and realizing collaborations and partnerships.

Mr. Geron Kamberi, expert from European Movement in Albania, presented how we are using funding from Horizon 2020, Erasmus + and COST in our country. The points on which he based the discussion were on the possible networks to be established within the Balkan countries, in order to apply for project proposals and to implement them in framework  of  H2020, Erasmus and COST programs. Furthermore, he highlighted the ways how the countries that had access to these programs in the Balkans could provide support for other countries.

Then Mr. Eltion Meka, assistant professor at the University of New York, Tirana, and project coordinator of the one of  the Jean Monnet projects implemented in Albania “Democratization and Cooperation in the Western Balkans”, shared his experience implementing such project, which had benefited from the EU funding . During his presentation, he was focused on actical examples, starting with the way how  the project is written, the important points to be addressed, and how the funds are calculated.

Mrs. Albana Halili, coordinator of the project “Development and Implementation of Multimedia and Digital Television Curricula” at ‘Aleksandër Moisiu’ University in Durrës, explained in details how this project is being implemented. She also said that managing funds with the partners is  sometimes challenging and different problems might occur.

Mr. Adelina Basholli, Ph.D. at the Research Centre for South East Europe at the University of Sheffield, talked about Erasmus + project and how are academics using it and benefiting from it. She said that establishing partnerships with European-based scholars of different backgrounds in the field of education and research is a fruitful experience and an added-value on further developing and implementing other international projects in these fields. .

Mr. Pavle Sekerus, a professor at Novi Sad University, presented its project BioSense, which cross-fertilizes two most promising sectors in Serbia: ICT and agriculture. The final goal of BioSense is to incorporate all efforts and results of various research groups into a unique BioSense integrated system for agricultural monitoring. BioSense Institute coordinates or participates in a large number of international research projects, including Horizon2020, FP7 and Eureka. Only in framework of Horizon 2020, BioSense has implemented or is implementing 21 projects, and around 14 projects within FP7.

The activity continued with discussions and suggestions from peer-reviewers and panelists on co-operation opportunities to enable successful projects, what can be learned from each other where each country has unique characteristics and experiences and enables the development of science and education in the region.