In framework of the project: “Deliberating Socio-Economic Impact of EU integration – Albanian case and regional experiences” implemented by European Movement Albania in partnership with ELIAMEP, Greece, 12 webinars were organized throughout the July 2020, as part of the EU Integration Series. Webinars organized during the first week 03- 10 July were as follow: 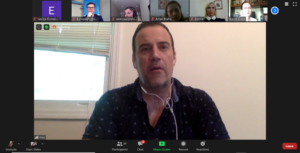 Webinar 1,  3 July 2020 –  the first webinar of the series was held on 3rd of July by Dr. Dimitar Bechev. Dr. Bechev talked about the Romanian and Bulgarian accession to the European Union. He said that the EU monitors the countries that have recently joined, the so-called Corporation Verification Mechanism (CVM) which is a way of saying those two have joined but they haven’t shown enough effort, so the EU needs to continue monitoring and implementing conditionality after membership. Dr. Bechev said that Bulgaria had a hyperinflation during the winter of 1997 because of the pyramid schemes that were occurring those days. Being a member state of the EU has rescued Romania’s and Bulgaria’s economic and financial state. They have got enormous amount of fonds and investments from the EU to make the country in the right level of an EU state. Dimitar Bechev states that the membership of these two countries was a failure since the start, he thinks that this journey offers a chaotic panorama. There was an interesting question asked by Erida Zenelaj: “How have Romania and Bulgaria engaged the civil society to participate in negotiation process?” Dr. Bechev responded that this has been a long process but the stakeholders involved showed a strong willpower. 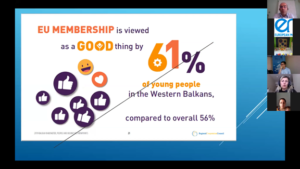 Webinar 2, 7 July 2020 – with the main topic on creating youth-friendly cities, with speakers Babis Papaioannou, Head of Monitoring the Regional Activities of the General Secretariat for Vocational Education, Training and Long-Term Education at the Ministry of Education in Greece, as well as an expert in creating youth policies at the local level. In his presentation he provided interesting facts where he stressed that European youth is seen as that category of the population that is most educated, yet the unemployment rate is the highest. To solve this problem according to Mr. Papaioannou suggests creating a city with a focus on youth, where the policies undertaken aim at their empowerment and inclusion, thus creating a youth-friendly city. This plan can be developed taking into account four steps. The first step is to provide financial support to the youth sector. The second step is the creation of departments or associations set up specifically for the youth. The third step, the involvement of young people in municipal units where they can contribute and help manage them. The fourth step, developing a strategic youth plan. These steps can be taken by finding an open-minded mayor with various funding provided by the EU or member states. 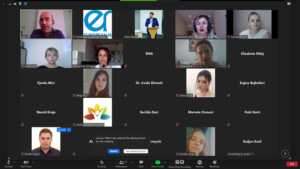 Webinar 3, 9 July  2020 – with the same speaker that was focused on the discussion of the European Youth Strategy. While the first program that was held for European youth was in the mid-1980s, the first long-term program held in Europe was called “Youth for Europe 1,2, and 3” for which an enormous budget of full 400 million Euros was envisaged. According to Papaioannou, in 1997 the first association for European young people who wanted to do volunteer work was inaugurated. Over the years the budget of youth programs has increased by adapting to the size and projects of the programs. Between 2007-2013, a new program called “Youth in Action” was created, with a budget of 886 million Euros. Meanwhile, in the period 2010-2018, the European Union has adopted the first strategy called “European Union’s Strategy for Youth”, in which there were 8 priorities such as: employment and entrepreneurship, social inclusion, youth participation, education and training, health and well-being, volunteer activities, youth and the world, as well as creativity with culture. Babis Papaioannou said that the EU has several agencies with which European youth can establish links and a professional network. During the years 2016-2020, the European Union launched a more advanced program called “Erasmus +” with a budget of 1.680 billion Euros. Babis then added that the EU has introduced the new plan for the years 2019-2027, where there will only be three areas in the focus of the Youth Strategy: inclusion, connection, and empowerment of young people. The budget of this program will be 3 billion Euros. The reasons why Europe is investing and engaging so much with youth can be divided into these three points: increased access to employment, education and training opportunities and greater opportunities for solidarity; mobility to learn; and participation and involvement. At this webinar there were 50+ participants. In the end, one of the participants, Joana Draçi asked a question: “In the volunteering program, are the same rights as for youth in EU member states and non-member states?”. 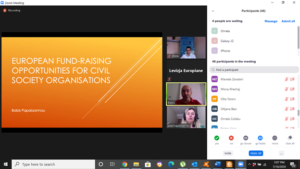 Webinar 4, July 10, 2020 –  where the speaker Babbis Papaioannou in this webinar explained more specifically the part of funding and fundraising opportunities for civil society organizations that have directed their work to young people. Fundraising – the collection of assets or resources from various sources to support a particular organization or project. During his presentation, he released interesting data where between 1977 and 2017, over $410 billion in fundraising contributions were made. Europeans donate the most in the child development and health sectors. Many international organizations are providing financial support to civil society, where some of those organizations are: EU, European Council, OSCE, UN, Eurasian Foundation, and many others. Mr. Papaioannou provided with simple steps and procedure that can be followed to raise and generate funds: the first step is to contact the relevant institutions, but before that it is important that the proposal to be presented should be easy to understand. Other points that should be made by the applicant’s organization are: the budget of the organization, the tax status of non-profit institutions, database of all donors, trained person for fundraising, information materials about the organization, and clarity about the use of funds. Before seeking for funding, these six points need to be considered: creating a fundraising plan; evaluation of strengths and weaknesses; goal setting; creating a fundraising calendar; gathering as much information as possible from organizations planned for funding; and lastly the presentation of the work of the organization through bulletins or online newspapers. The second step is: How to raise funds. This can be achieved by creating a program for individual contributors and should aim to raise funds from a maximum of 5 organizations that come closest to the organization profile. The third step is applying for grants, which can be found by doing online searches, listings of foundations, links, and other organizations doing similar work. The last step is waiting for responses from the institutions, despite the important result is maintaining ties and the will for other future collaborations. By the end of the webinar the most asked questions were: “Digitalization will be one of the main topics for EU funding, what about other topics that will be considered priority for future calls?” And “Can you tell us what topics were more in focus in previous years?”. There were nearly 60 participants and all of them kept the webinar engaging.

Nirvana Deliu, European Movement in Albania presented the findings of the study conducted on the debt of the Greek state during the period 2008-2016. In this study, the focus is on the role of the three main actors in crisis management: 1) political parties in both the role of government and the opposition who failed to complete the measures for the reform of the country, although they managed to sign three rescue packages for Greece; 2) The troika composed of the EU, the ECB and the IMF and their role in providing assistance to Greece and the establishment of qualified and very severe or unfair conditions; 3) Greek citizens who felt disappointed by both political actors within the country and the international community.

During this week Anita Lushi, presented the first findings of the study on the prospects of Europeanization of Albania conducted in several regions of the country: Tirana, Durres, Gjirokastra, Elbasan. Korça and Shkodër with 100 interviewers in total, mostly young professionals. Specifically, two of the main problems that Albanian society faces today were analyzed, as well as the priority issues that the Albanian state must address. Among the main problems listed by the respondents were: unemployment and poverty, as well as weak rule of law, corruption and organized crime. Meanwhile, the issues that need to be addressed first by the Albanian state were: unemployment and poverty, weak rule of law and then followed by the economic development of the country and the quality of education