In framework of the project: “Deliberating Socio-Economic Impact of EU integration – Albanian case and regional experiences” implemented by European Movement Albania in partnership with ELIAMEP, Greece, 12 webinars were organized throughout the July 2020, as part of the EU Integration Series. Webinars organized during the third week 21- 28 July were as follow: 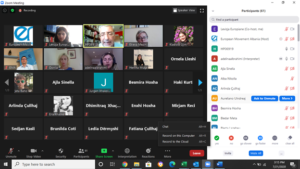 Webinar 8, 21 July 2020 – In the eighth webinar the topic of discussion was European Identity- Does the EU have a unified policy upon common citizenship?. The main speaker in this webinar was Dr. Lambros Baltsiotis, a scientific researcher on citizenship in Greece and Balkan, migration, and ethnic issues of the nation-state. His main focus was key issues that citizens encounter in receiving citizenship from the country they have applied and the conditions they are treated in regards to their cultural background. Then, he compared the policies of Member States upon citizenship and how the political ideologies, Left or Right, implicate this process to create more diverse legislation inside the EU. A particular focus was given to the Roma community case, the members of which face difficulties to provide documents for their decency. Participants engaged in discussions on how the citizenship case may interfere in the integration process of Albania in the EU, since a large proportion of Albanians live outside of the present borders of the country. 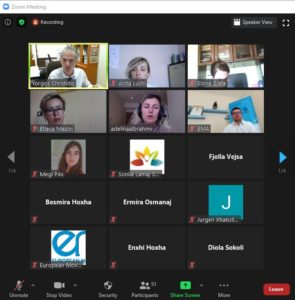 Webinar 9, 23 July 2020 – In the ninth webinar, the topic of discussion was EU policies in the relation of Roma community integration and the integration of Balkan states. The main speaker in this webinar was Dr. Yorgos Christidis, professor at the University of Thessaloniki and researcher at ELIAMEP. The main focus was the response of the European Union in the integration process of the Roma community through cohesion policies as a tool to shrink prejudices against them and to stimulate their social welfare. To begin with, Dr. Christidis presented a historical overview of Roma community treatment in the social- political sphere after World War Two and after 1990. He noticed the comparison of the treatment towards the Roma community between two ideologies of the time, East and West, and emphasized the challenges they have faced in everyday life, their social integration and attempts to assimilate Roma culture with the modern times. Also, it was explained how the EU narrative has changed towards the Roma community in parallelism with EU enlargement. Participants engaged in discussions about the discrimination the Roma community encounters in the labor environment, educational, and institutional centers.

Webinar 10, 24 July 2020 – In the tenth webinar, the topic of discussion was “The European Union Media and the communication environment”. The main speaker at the webinar was the Greek journalist Alexandra Voudouri, an analyst specialized in foreign and political affairs of the Eu and the Balkans. Her main focus was to present the working structure of the journalists and their challenges inside the European institutions. She continued scrutinizing the core of the European Union, as an organization that represents and has responsibilities for 27 countries, and the necessity to understand the relationship it has with each state government under its rule and the assistance it provides to them, and vice versa. She spoke about how the media serves as a mediator to construct the link between the public and bureaucratic institutions to update news that touches their interest, a responsibility that raises the question of the journalists’ validity skills to distinguish what is being presented by the EU institutions and the true essence of their decisions. Participants engaged in discussions about the credibility that flash news can have and the consequences fake news can bring in moments of political tension. In total, 65 interested people participated. 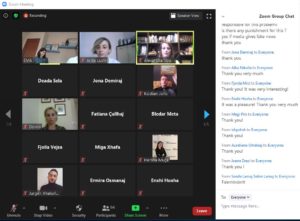 Webinar 11, 28 July 2020 – In the eleventh Webinar, the topic of discussion was “Reporting on the Berlin Process – Current and Future Initiatives in the Role of the EU Accession Process for the Western Balkans”. The main speakers were Dr. Ioannis Armakolas and Bledar, researches and political analysts at the Hellenic Foundation for European and Foreign Policy. Bledar Feta, in his presentation, made a complete overview of the Berlin process, including its history; regional political goals; the political agenda. He further touched on how this process is derived by the principle to maintain the solution of Balkan countries’ conflict and to push further the Western Balkan region towards the accession process of the EU. Dr. Ioannis Armakolas dwelt in detail on the analysis of the strengths and weaknesses of the Berlin process. His critique was explained as a prediction of 6 scenarios on how this process could affect the Western Balkan region, followed by the latest socio-political and economic developments. The predictions of scenarios were listed in a chronological axis, starting from the interruption of the process due to its failure, its unchanging continuity, its metamorphosis ruled by permanent bureaucratic bodies with predetermined policies; its adjustment in regards to the political reality created by the EU- Albanian relationship; its radicalization by giving extended importance to the civil society and businesses as a key player on decision-making during the process; and its reorientation on a common regional solution about the accession policy. Participants integrated into discussions, by taking examples of other Balkan countries that are part of the EU, comparing the situation under the lens of the current internal political situation of Albania and its side effects to regional and strategic plans. In total, 40 interested people participated

Nirvana Deliu, European Movement in Albania, during this week presented the findings of EMA publication on the structures created for the negotiation between EU and Albania, and upon the possibilities of involving the civil society in this process too. The focus was on the negotiating structures like: the Partnership Platform and the Consultation Tables for the 33 chapters that are going to be negotiated; the Negotiation Group and the negotiating working group that is being arranged in each ministry for the respective chapters. The involvement of civil society in this process is valued important both for its informing on this process, as well as to offer space for the  civil society to contribute and to offer their experience and expertise in this technical process.

In the third week, Anita Lushi, Academy of European Integration and Negotiations, continued with the presentation of the findings of the questionnaire on financial issues and factors that may implicate Albanian integration in EU. In the beginning, she analyzed the financial situation of the Albanian population and the causes that have influenced it. Meanwhile, she delivered a prediction on how the financial situation may change in the near future and the reasons that are thought to affect it. Support for Albania’s EU entry was also one of the topics addressed in this week’s webinars. The support of the most important entities inside and outside the country regarding the EU accession was examined in detail. Two of the most important findings that were taken into analysis were the factors that threaten Albania’s entry into the EU and the reasons upon France’s veto in October 2019.