In framework of the project: “Deliberating Socio-Economic Impact of EU integration – Albanian case and regional experiences” implemented by European Movement Albania in partnership with ELIAMEP, Greece, 12 webinars were organized throughout the July 2020, as part of the EU Integration Series. Webinars organized during the second week 14- 17 July were as follow: 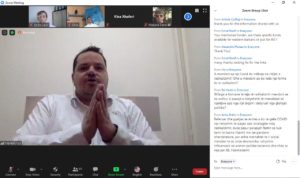 Webinar 5, July 14 2020 – Webinar 5 took place with the main speaker Dr. Karantrantos. He spoke about “EU Policies in the field of Countering and Preventing Violent Extremism”. He started with a definition of radicalization which is the process of leading into violent extremism, where people adopt extremist belief systems. In 2011, the EU established the Radicalization Awareness Network (THE RAN). RAN is an umbrella network connecting people involved in preventing radicalization and violent extremism throughout Europe. The EU Council, European Commission, and the EU Internet Forum have working groups for fighting radicalization. The strategies that are taken by the EU to support the Members States against radicalization are: boosting research, evidence building, monitoring and networks, strengthening international cooperation, and countering terrorist propaganda and illegal hate speech online. There were approximately 60 participants, where most of them kept the webinar very engaging with questions and discussions. 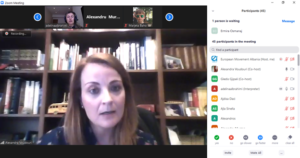 Webinar 6, July 16 2020– The sixth webinar took place in ZOOM, with the main speaker Alexandra Voudouri, a journalist specialized on EU issues and enlargement process. Mrs. Voudouri talked about the “Media reporting on EU accession negotiations”. First, she started by stating that the EU gave the green light to Albania for the journey to be a part of the big EU family. The media’s role in reporting the EU’s work cannot be understated. The media has the potential to influence public opinion and citizens attitudes. The main process employed by the mass media is framing and priming which this is the process of making the news trustworthy. She presented the findings of the European Council on Foreign Relations poll about: “How many Western Balkan Countries should join the EU in the next decade?” and Italy, Poland, Slovakia, Hungary Greece, and Romania mostly voted for “All of the Western Balkan Countries should join the EU” and Austria, Czech Republic, Denmark, France, Germany, and the Netherlands did not seem to warm with the idea of the Western Balkan countries joining the EU. At the webinar there were about 50 participants who were engaged with questions. Focus of the discussion was how new COVID pandemic situation affects media access, which are the policies of EU in this matter and how media can be used as a tool for lobbying for EU accession of the WB. 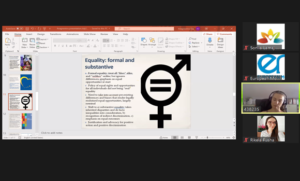 Webinar 7, July 17 2020 – Webinar that was held by Dia Anagnostou in 17th of July was about European Union Gender Policy in Higher Education. There were roughly 65 participants in this webinar. There Dr. Anagnostou explained that EU law and policy on gender equality was developed in a response to mobilization. Amsterdam Treaty was established as an organization that would omit discrimination between men and women. A way of omitting discrimination is to transform the institution. Changing the system and structure of a certain institution instead of promoting individual or group rights. Dr. Anagnostou adds that mainstreaming gender will be the biggest difference maker in this process that has been going on with centuries. Dia Anagnostou to this question suggests a solution to read in an annual article that is released annually by the European Commission and the latest study was published in 2018, other than that Dr. Anagnostou states that 68% of university students are women in specific areas such as social sciences. But there is no exact rate of employment for women post-graduation, after they get in the labor market.  It is proven that unfortunately even in higher education women are still not in an administration level. Also, by the end of the webinar there was a question about how can women in academia tackle the subtle mechanisms and implicit assumptions that perpetuate gender inequality in decision-making in EU without being perceived as “too angry or too aggressive”?.

Nirvana Deliu, European Movement in Albania, this week presented the publication made by Dimitar Bechev on the process of Bulgaria and Romania&#39;s EU membership, highlighting the lessons learned from this process that may be valuable for countries aspiring to entry in the EU, where one of them is Albania. The publication draws some valuable conclusions focusing on the strengthening of democracy as a fundamental element for the development of reforms and their proper implementation, the involvement of civil society actors in this process, and the importance of the EU monitoring and evaluation role for a membership process. successful.

In the second week of the sessions, Anita Lushi, from the Academy of European Integration and Negotiations, analyzed some issues addressed in the questionnaire conducted with 100 young professional respondents in Albania. Firstly was addressed the position of Albania in the international arena, then the issues that should be a priority to be addressed to the Albanian state in the coming years. Following this week, an analysis was made of the position of the most important international actors and the variability of their position in the international arena, and the factors that have influenced this position.