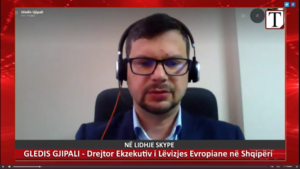 Gledis Gjipali, Executive Director of EMA invited to Tema TV, on December 10, 2020, regarding the loss of another chance for Albania to reach negotiations with the EU. On this topic, Gjipali said that Albania has still many unfulfilled tasks like the  Constitutional Court issue and the laws regarding electoral reform on one hand and on the other , the blockade of Bulgaria that makes some countries more skeptical for Albania. Regarding the reports of some foreign media, that there are three scenarios of the German Presidency for enlargement, among them, the approval only for Albania of the negotiating framework, he said that although there is still room for lobbying by member states until the holding of meeting of the European Council, again according to him, the chances are small and skeptical about convincing members.