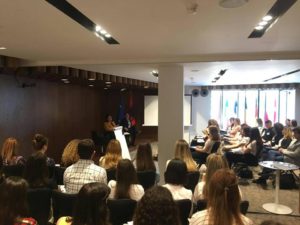 Training sessions of participants in the EU Institutions Simulation (EUIS) were held on 31 May 2019 in Europe House.

Ms. Mona Xhexhaj, Programme Director of EMA while briefly introducing EMA explained that EMA’s goals include engaging and offering such opportunities to youngsters, in order for them learn and to increase their capacities and skills.

Afterwards, Ms. Olta Qejvani, Lecturer at the Faculty of Legal and Political Sciences, University of Durrësi, who has joined EMA’s team of trainers for the first time this year made a brief introduction of institutions of EU such as: European Commission, Parliament and Council of EU, by pointing out the main differences between the role and weight these institutions. She explained as well the decision-making process within EU. By engaging youngsters in various working groups and energizing games, Ms. Qejvani emphasized the need not only to know this process in theory but most importantly to be included in this procedure in a practical way.

The chosen theme for this year’s simulation was the Directive (EU) 2019/790– “On copyright and related rights in the Digital Single Market”, which was introduced by Mr. Embro Ahmetaj, Lecturer at the Faculty of Law, University of Tirana, who was also a trainer during the simulation.
Mr. Ahmetaj completed the presentation of the topic by providing general information on what would be discussed on the simulation day, while gave interesting cases and scenarios that would be affected by this Directive.

The presentations were concluded by Mr. Albi Çela, participant of MEU Strasbourg 2017, and trainer of the EUIS in Tirana, who briefly explained the rules, procedures and method of preparation for the simulation, clarifying the role each student would have in the institution they were selected to represent. Participants also had the opportunity to hold a parliamentary group meeting, according to party divisions, appointing the Faction Leader and the Faction Secretary; and finally the Council of Ministers’ met to elect the Council President and its Deputy. The scope of discussions allowed any ambiguity on the assignment to be explained and gave to participants more than 10 days to prepare for their role and collect the needed information for the chosen topic.

***
The EU Institutions Simulation took place on 10 June 2019, where 40 students dressed as MEPs, commissioners and EU ministers discussed and voted on the 2019/790/EU Directive regarding Copyright in Digital Single Market. The representatives of the European Commission, Ms. Lorenca Bejko and Ms. Anxhela Mustafai presented the Directive to European Parliament members arguing on the relevance of this directive and urged the Parliament and the Council to adopt it. The next ones to give their opinions on the proposal were the political groups of the Parliament. The discussion which was held mostly in technical and legal level, was sometimes heated by rejections and opposition by some far-right MEP, like Deputy of Ms. Veisana Bode, or non attached MEP-s like Mr. Maringlen Kurtaj. For not respecting the regulation and disturbing the other members, the Presidency of the European parliament, represented by Ms. Suada Dida as the President and Ms. Silvana Rusi, as deputy president were forced to temporarily suspend the discussion and request to them to leave the room for some minutes. Even though there were debates, slogans, and reactions by the side of some MEPs, the Parliament nevertheless achieved to successfully adopt the directive after its amendments.

The discussion by the Council of the European Union was more constructive, and objections came from only two countries , as the only ones to perceive that this Directive will affect them in a negative manner. The Ministers gave their arguments if the adoption of this Directive is in the interest of their countries and the EU. In conclusion, the Directive was voted by most of the Ministers of the Member States. At the end of the event, for the three relevant EU institutions were announced winners and certificates were distributed to all participants, mentioning as well the students who offered the best performances.
The simulation activity resulted very successful, as the students were fully committed to their roles, the presentations that emerged during the discussions and the voting, as well as in the realistic representation as officials from EU institutions. At the end of the simulation, the participants were clarified regarding the functions and importance of each of the EU institutions while facing difficulties of negotiation and voting. The project sparked critical thinking, art of communicating and negotiating with individuals who carry different opinions and views, as well as public speaking and presentation. The challenge for this year was also the fact that students representing the European Parliament were representing their country and their political group, meaning that in some cases the interest of their country might be in contrary fo the interest of their political group.