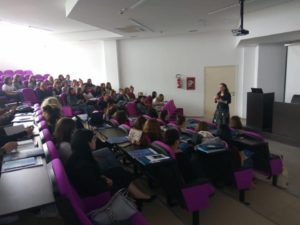 On 28 May 2019, in the premises of University “Aleksandër Moisiu” in Durrës, was organized Youth Forum 2 with the topic: “EU elections: Their implications on EU and Albania’s future” under the project ”Europe Day 2019” which European Movement in Albania has being implemented with the suport of European Movement International and European Commission, Europe for Citizens Programme.

A meeting was held between EMA representatives and Deputy Dean of the Faculty of Law and Political Sciences, Prof. Asoc. Dr. Andon Kume. Mr. Kume expressed his willingness to cooperate in other similar activities that have in focus youngsters and relevant topics including European Union, EU integration of the country or various developments that affect EU or Albania’s integration path as well.

Ms. Nirvana Deliu, Policy Researcher of European Movement in Albania thanked representatives from the university for making this activity possible, while emphasizing the need to discuss with students and young professionals about such issues, not only providing them information on what is going on in EU, yet to help in boosting their own critical thinking and opinions.

After that, Ms. Olta Qejvani, Lecturer of the EU Law in UAMD, made a brief introduction to participants about the European Union Institutions and how the process of voting for the European Parliament is implemented. She briefly introduced the main political groups racing in these elections and which are the possible scenarios based on voting results in 28 EU countries.

Dr. Klodiana Beshku, Advisor of Minister of Europe and Foreign Affairs in Albania presented in more details how the EU elections went, which were the predictions and estimates of the result and what will happen now that the voting has ended. Using a more social and theoretical approach, she analyzed why EU citizens voted in this way mentioning main factors internal or external one. Comparing current election with the previous one, Ms. Beshku analysed the differences between them. Having more a positive approach she explained that even though there was the fear of a rise of populism, of extremism that could put in danger the EU, yet in reality this danger is not real and the European project will go on.

After the presentation a discussion with students and lecturers of the University was held, having in focus an important point such as the question what the results of these elections mean for Albanian future towards EU?