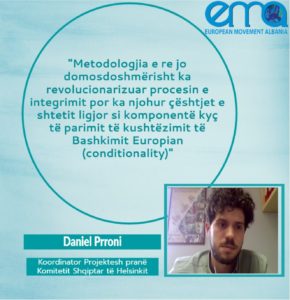 On June 28, 2021, was held the sixth activity of the cycle of information activities that are taking place in framework of EuroSpeak. This time the focus was on ‘Albania and the Rule of Law’ analyzing the progress of our country in this context. The event was moderated by Anita Lushi, representative of EuroSpeak.

Klodiana Beshku, Lecturer at the University of Tirana praised the work done for EuroSpeak and started her speech on Albania’s European integration by focusing on the obstacles created by the Bulgaria concerning the start of the First Intergovernmental Conference with North Macedonia and Albania. She said that states play an important role in political decision-making process, taking as an example France which promotes EU deeper enlargement  as opposed to the UK which has supported immediate wider enlargement. Beshku also said that Germany in such political situations tries to play a balancing role.

In addition, she stated that the Western Balkan countries had the same problems with such trends:

In conclusion, she added that the continuation of the negotiations carries a paradox given that the EU would have the opportunity to control better than now the democratic mechanisms in Albania and other Western Balkan countries if they were Member States.

Daniel Prroni, Project Coordinator at the Albanian Helsinki Committee discussed about the EU Principle of Conditionality and the New EU Enlargement Methodology. He said that this principle is not a new concept in politics and clearly shows the dynamics between the parties and the desire to dominate over each other. Prroni explained in detail the stages of European Union enlargement, saying that there were no preconditions for countries like the United Kingdom, Ireland, and Denmark. During the integration of Southeast Europe, pluralist democracy and respect for human rights were demanded as key conditions. The market economy was addressed after their membership. With the Copenhagen Criteria there was a reform of enlargement policy, and the Principle of Conditionality was used as the main tool. He said that recently, this principle accompanied by some sanctions is being applied to countries within the EU (Poland and Hungary). EU membership has not motivated the leaders of state or government in this region to reform and weak countries have more conditions. In these countries, progress towards EU membership serves to  legitimize more the ruling groups. Finally, Prroni spoke about the balances in the region and the challenging factors in the EU. He suggested that conditionality should be countered by specifically strengthening local institutions.

Sabina Babameto, Project Assistant at the NDI Albania office spoke about the financing of political parties. She said that although they are autonomous entities, the need has arisen to regulate their way of financing.

States have established control mechanisms because by doing so:

* They prevent the ruling party from using public resources – whether human, financial or logistical – to support its election campaign in a way that would give it an unfair advantage.

* They create an equal “playing field”- all parties are subject to the same legal provisions governing their access to sources of funding, where backing from private funds is of particular importance.

* They can provide more equality to women, but also to other underrepresented groups, in terms of access to resources to fund their campaigns.

* They reduce the scope for abuse of public resources, corruption, and the financing of illegal money campaigns.

Babameto mentioned that the latest report of the European Commission stated that Albania lacks effective and quality law enforcement.

She commented that the completion of the electoral reform followed changes in the electoral code, the CEC emerged as a reformatted institution and a key regulator for monitoring electoral subjects. The Electoral Code defines public and private sources of funding. She added that financing from private funds is more problematic and apart from the ceiling on donations, foreigners cannot finance Albanian entities. Political finances are particularly important because they serve the principle of accountability and increase citizens’ trust in governance, democracy, and institutions.

Open discussion: Questions were raised about the European perspective of Albanian youth, the impact of EU conditionality on changing the behavior of states and the fake adaptation of values.