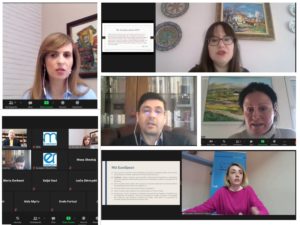 On February 25, 2021, EuroSpeak organized the informing activity focused on “Covid-19, fake news and disaster management. This was the second activity out of a cycle of activities that will be held in the period January – May 2021 on various topics. These activities include experts, lecturers and journalists who will contribute to critical thinking on various aspects of European Integration, as well as share information on current issues and topics in this line. This event provided basic data related to the pandemic, the modifications in dissemination of information and its content, the reflected effects in our society, disaster management as well as the panorama of this prism in our society. The pandemic has caused a lot of distress all over the world, one of which, and perhaps with the greatest resonance beyond the health dimension, is precisely the distortion and dissemination of information. Hence, informing the public is the first and essential step in disaster management. When this information loses its authenticity, and is also shaped by the subjective interests or desires of second or third-party actors (media owners, journalists, or other people for the purpose of misinforming the public) the risk of disasters exceeds the dimensions of manageability and creates difficult situations at extremely high costs. Initially, the activity was oriented towards the introduction to concepts like: disaster risk management, contributing factors in minimizing or maximizing effects, disaster coping strategies and levels of preparedness of different countries. Then it continued with fake news, the role of the media in disseminating information and the difficulty of the reader in verifying the accuracy of the source. In the last part of the activity, the media coverage of Covid-19 in our country was commented. Speakers at the event were Dr. Elona Pojani, Dr. Perseta Grabova, Dr. Ilir Kalemaj and Suela Musta. The event was moderated by Anita Lushi, EuroSpeak staff who at the beginning of the event provided some information on EuroSpeak – the first magazine in Albania which brings to the public in a simpler language qualitative and independent analysis of EU issues, and some statistics on articles published in this magazine over the years.

Dr. Elona Pojani, lecturer at the University of Tirana, began her presentation by talking about disaster risks. Firstly, she explained how the level of a development of a country affects only the consequences and not the exposure to disasters. Dr. Pojani spoke specifically about disasters in Albania, considering it as a country with high exposure and said that they occur for natural and anthropogenic reasons. The data show that the level of risk is increasing and is relatively higher than in neighbouring countries. She gave a detailed explanation on the disaster risk management cycle by making a comparison between developed and developing countries. Disaster recovery for Albania is financially supported by the state budget, private or public donations and international loans. Further, Dr. Pojani spoke about the factors that affect the level of economic sensitivity to disasters.

Dr. Perseta Grabova, lecturer at the University of Tirana, addressed the ex-ante and ex-post strategies in terms of funding in times of disasters. The ex-ante strategy is considered more sustainable because the risk management cycle is complete. The level of disaster sensitivity is also influenced by public perception. Mrs Grabova took Covid-19 as an example, saying that at the beginning of the pandemic, fear guided the behaviour of individuals. Although the risk has remained the same, people pay less attention to safety measures indicating that the perception of risk has changed. Moreover, Mrs Grabova added that risk management in Albania is done in accordance with the EU agenda. In conclusion, it was asserted that for a better risk management it is necessary to make early warning systems, raise public awareness, continue international cooperation, etc.

Dr. Ilir Kalemaj, from New York University in Tirana, addressed the issue of fake news. He talked about the “post-truth” period and the role of social media. Mr Kalemaj stated that a fake news is equal to 19 sponsored ads in traditional media in America. He provided a lot of  examples to illustrate the effects of misleading information on politics. Mr Kalemaj stated that wealthy individuals have bought big media outlets and try to exercise control over the dissemination of information. This transformation in the digital age is seen even in Albania where there is no clear distinction between serious press and other types of news. Another problem in our country is the fragmentation of the media leaving no room for independent verification of the sources.

Suela Musta, journalist, spoke about the media coverage of Covid-19 empirically. She brought to attention her study conducted with on-scene reporters, as well as the monitoring done on some of the largest television stations in our country. It turns out that they have been caught off guard with the flow of covid-19 related news. She said that fake news gave a chain effect on the mental health of vulnerable individuals. Mrs Musta presented the outcomes drawn from the interviews conducted as part of her research work. She stated that often the official data did not match the data in her research. The media has covered every possible piece of information without taking care to filter the sources. In conclusion, she gave some suggestions on how the media can be impartial saying that the time has come to create a group of scientific journalists specialized in delivering news related to these kind of emergencies. Mrs Musta said there should be manuals on how to use resources in such emergencies and fact-check platforms should be set up.

Discussions focused on the link that anti-defamation law may have and fake news.

You may find the activity online on Youtube: https://www.youtube.com/watch?v=0v30kfuOxBs