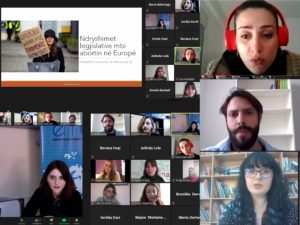 On March 25 2021, EuroSpeak organized an online activity focusing on ‘Women’s Rights in the EU: Sexual and Reproductive Health’. This was the third event of a cycle of activities that are being held during January – May 2021. Each activity is addressing some of the most important issues that have been identified by the contributing authors in EuroSpeak. These activities are supported by the ‘Civil Society Program for Albania and Kosovo’, funded by the Norwegian Ministry of Foreign Affairs and managed by Kosovo Civil Society Foundation (KCSF) in partnership with Partners Albania for Change and Development (PA).

Nirvana Deliu Policy Researcher at EMA, greeted the participants and briefly introduced EuroSpeak as the first Albanian magazine in Albania to address EU issues. Deliu also provided some information on EuroSpeak sections and explained the way authors can submit their articles to be published.

Dr. Gerta Mehmeti lecturer at the University College Pavarësia in Vlora (KUPV), in her presentation adressed the legislative changes on abortion in Poland and the bioethical problems associated with it. She stated that in some EU countries abortion is allowed due to economic and social reasons. Recently, Poland decided to ban abortion even if the fetus has development problems. Mehmeti added that the medical staff has the right to refuse carrying out this procedure. She pointed out that the biggest discussions arise about fetal age as some countries do not allow abortion after a certain stage of fetal development. In her presentation, she also mentioned the 2008 Resolution which stated that the restrictions imposed by states regarding abortion have a discriminatory effect and that abortion should not be seen as a method of family planning. The 2020 Resolution stated that the right of access to the health system is universal. Mehmeti also spoke about the moral status of the fetus, natural law and pro-life movements. She also provided further information on The Geneva Consensus Declaration even signed by several European countries such as Poland, Hungary and Georgia. She concluded that abortion should be seen as a guarantee for a woman’s good health and its prohibition leaves room for illegal abortions.

Megi Reçi, Civil Rights Defenders summarized her article regarding the decision of the Constitutional Court in Poland, the protests and the Resolution of the European Parliament. She said abortion was previously allowed in this country for three major reasons: as a result of crime, endangering women’s health and fetal defects. Reçi said the EU had called on the Polish state to stop attempts to ban abortion. She linked abortion to women’s right to health care and pointed out that the rights of women and girls are being endangered in many parts of the world and that it has worsened with time.

Boris Belortaja, Master student in European and International Law commented from a legal point of view the structure of the Polish court decision. He said the idea of ​​his article was to give an European and international constitutional perspective. Belortaja noted that the right of the mother is not found in any of the paragraphs of the Polish new legislation He said that it is not atypical for fundamental rights to clash between them. Belortaja emphasized that his opinion is based on the jurisprudence of Strasbourg (ECtHR) and Luxembourg (CJEU) although the latter is not fundamentally about human rights. He added that the Strasbourg Court instructs the courts of member states to use the theory of balance as part of the proportionality test. In this case the rights of the mother and the fetus must be compared.

Discussions were raised on the status of the fetus, the role of the father, the moral dilemmas associated with abortion, and lastly the participants’ subjective views on a woman’s right to abortion and the concept of the fetus and its rights as a human being.