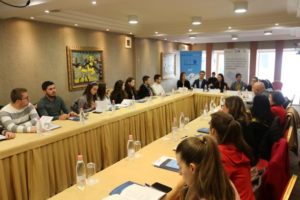 On framework of the project “Evolving or Revolving: Institutional reforms and democratic legitimacy in Albania, Kosovo and Montenegro “ implemented by Democracy for Development (D4D) (Kosovo) with the support of European Fund for the Balkans (Think & Link Programme), took place in Tirana on 24 January 2020 an activity organized by EMA as partner organization of this project. This activity brought together experts from different fields and also participants from several sectors such: governmental institutions, civil society, academics and students.

The activity was shaped in a debate-forum form focused in the reformative role of EU in the Balkan region, more specifically in Albania, Kosovo and Montenegro. Mr. Gledis Gjipali, Executive Director of EMA opened the activity by presenting the panel and the aim of the meeting. He emphasized the need for spaces of debate and discussion concerning the EU integration process. Afterwards, the Deputy Minister of Justice, Dr. Fjoralba Caka during her speech stressed out the transforming power role of EU. One of the Copenhagen criteria’s, underlined the Deputy Minister, is the approximation/adaptation of the legislation of the candidate countries with that of the EU. Under EU supervision the gaps of the candidate countries legislation can be detected and this makes possible that a real assessment and monitoring of the process of harmonization and approximation to in accordance with values and basic principles of EU. So, the EU role goes beyond legislation review, it goes on establishing and building new institutions; while reformulating some of the basic concepts (for example: rule of law) and transferring the values. One of the issues brought in attention was the decline with 11 places of Albania in the Transparency International report 2019, where the Deputy Minister analyzed the formula of measuring the index and took into consideration the factors that indicated this decline on the Albania position and how this is translated in the everyday life. Also, she made a brief introduction of the crucial issues on which the Ministry of Justice is working.

Following the Deputy Minister, the representative of D4D (Kosovo) Valëza Zogjani, Policy Researcher, did a short presentation of the project which is being implemented from D4D together with EMA and CeMI from Montenegro. This project has in focus to conduct the study, but also to organize national meetings withstake holders to discus the findings and report results.

The discussion continued with the presentation of the paper from one of the authors of the study Nirvana Deliu, Policy Researcher at EMA. Nirvana focused her presentation by giving a full picture of the integration process of Albania, key moments of this process and the materialization of the priorities. Important element during her speech was the evaluation of relations between Europeanisation and Democratization, whether are those two processes connected in Albania; meaning:  is the Europeanisation helping on the country democratization, or is being superficially implemented with the only objective to adhere in the EU. From the other hand, she discussed democratization in Albania, where several elements which can prevent or slow down this process were took in consideration, such as: 1) weak democratic culture; 2) lack of institutional capacities; 3) lack of clear and objective information on the reformation and Europeanisation process; 4) the use of this process only by the political actors and mostly for their political reasons.

An open discussion followed the presentation, with two invited experts, Dr. Ilir Kalemaj, Deputy Rector of University of New York in Tirana and Dr. Elda Zotaj, Chief of Political Sciences Department in University of Durrës. An open debate with participants enabled the discussion of several topics related with the dilemma that the EU is facing recently: deepening or enlargement of the European Union? Also, geopolitical issues such as the Russian influence on the region, the efforts of Balkan countries to undertake alternative initiatives such as Balkan Mini Shengen or issues of relations and reconciliation between countries of the region were other topics of interest which were reflected during the debate.