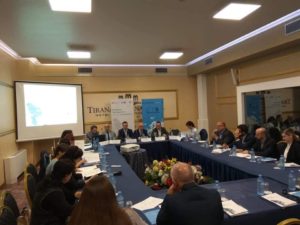 The European Movement in Albania (EMA) in cooperation with the Organization for Democracy for Development (D4D) in Kosovo and Transconflict in Serbia, with the support of the European Fund for Balkan (EFB), organized on 2 November 2018 a Discussion Forum in Tirana on “Connectivity for  Development in Albania-Kosovo-Serbia axis”. The activity aimed to increase awareness and transparency regarding the importance and pace of progress in implementing these complex cross-border infrastructure and energy investments. Initially, the main findings of the Regional Research were presented by partner organizations on the current situation of projects invested in these three countries, while the discussion with other panellists focused on the current status of transport and energy projects in Albania. This meeting was welcomed by Mr. Gledis Gjipali, Executive Director of the European Movement in Albania.  Mr. Gjipali focused his speech on the importance of cooperation between the Western Balkan countries in the context of the Connectivity Agenda, which  aims on linking the transport and energy infrastructure through tangible projects and investments, in order to strengthen economic growth and competitiveness of the region.

Then Mr. Gersi Gashi, representative of Democracy for Development (D4D), presented the projects undertaken on the connectivity for development in the Albania – Kosovo – Serbia axis. He said projects that are expected to be implemented in Kosovo have very ambitious agendas and there is a strong political support, but they have posed problems in the implementation process. Work has been running very slowly and has had obstacles especially in Kosovo-Serbia partnership. Also, the administrative capacities in Kosovo are lacking.  The recommendations provided by this study include establishing a monitoring system of the work on the administration system that implements the projects and also to update the official websites of the institutions, thus increasing public trust and encouraging accountability.

The expert for Albania, Ms. Gentiola Madhi presented the results for our country with a focused approach on transport and energy. She initially talked about the National Strategy for Development and Integration (NSDI) 2015-2020, the relevance the Connectivity Agenda has and the challenges that Albania is facing during these years. She then was focused on the four projects she had closely studied. 1. Mediterranean Corridor: Railway Interconnection Montenegro – Albania-Greece, where Tirana-Durrës railroad is expected to be rehabilitated initially, which will bring many benefits to the country, but in practice its implementation is delayed and it is not likely to be finished in 2020, as expected. The researcher thinks that more funds will be needed until its completion and a fund for electrification has yet to be approved. 2. As regards the second project, Adriatic-Ionian Highway, a study is currently being carried out to assess  its feasibility, and the first issues that are being raised are those related to the territory, informal constructions and issues of compensation or ownership disputes. 3. The third project for the reconstruction of the Port of Durrës is in its preparatory phase and in 2019 it is expected to begin the study of visibility. Albania has received a grant of 1.1 million €, and is expected to receive another loan from the EBRD if it meets the appropriate financial conditions. 4. Finally, regarding the energy, the project that has to be implemented is the Albania-Macedonia interconnection line, which consists of two components: Fier-Elbasan and Elbasan&QafëThanë transmission line construction and reconstruction of Fier&Elbasan substations II. This project has started in Macedonia, while our country is expected to start it in 2019.

After the presentation of the studies of two countries, Kosovo and Albania it was Mr. Sokol Dedja, Director of the EU Directorate at the Ministry for Europe and Foreign Affairs who took the word,. He discussed about the importance of the Berlin Process and its future for the further development of the Western Balkans and the progress of the region towards the European Union. He also made a reflection on the Connectivity Agenda 2015-2018. The representative from the Prime Minister Office, Department for Development and Good Governance, Mr. Oljan Kanushi presented some of Albania’s strategic projects within the Connectivity Agenda. He said the government has the will to bring these projects forward. He also reflected some work done so far on behalf of the executive. Mr. Kanushi reiterated the importance of regional co-operation among the Western Balkan countries and showed some cases where there were clashes between countries. Mr. Agim Bregasi, from the Ministry of Infrastructure and Energy, the Directorate of Energy Development and Efficiency Programmes spoke about the energy project Albania – Kosovo – Serbia. He stated that the work has stopped in the Kosovo – Serbia line, for unwillingness by the Serbian side. He also spoke in his speech about the challenges and the current state of implementation of soft and hard measures in invested connectivity projects. Finally, Mr. Bashkim Kasoruho, Head of Project for Rehabilitation of Albanian Railways by Ministry of Infrastructure and Energy, took the word. He emphasised the implementation of connectivity projects and the problems encountered in practice. He stressed that the challenge in the coming year remains the involvement of as many professional consultants as possible to avoid technical problems and also a lacking of comprehensive political will.

At the end of the meeting, the participants reiterated the usefulness of the discussion, which was very fruitful. It was also emphasised the importance of the Berlin Process, which is an impetus for establishing closer economic, political and social cooperation between the Western Balkan countries. One of the main pillars of this cooperation is the Connectivity Agenda.

Connectivity for Development, taking the Highway for Economic Growth