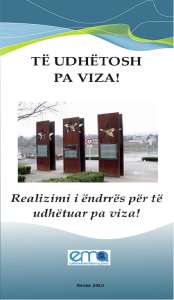 EMA has constantly played an active role and became a focal point for a wide range of stakeholders on national and European level regarding the visa liberalization process. Its commitments in this respect dates backs to the beginning of this process when visa dialog was launched between Albania and European Union on 2008.

EMA was one of the main actors which among dissemination of information on how this process was going on, has also taken an leading role on advocating and lobbying at European level by contributing to push forward this process. In compliance this mission EMA has presented lots of informative materials (posters, leaflets, flyers, radio and TV spots) such as:

Transparency of information in embassies of the Schengen countries