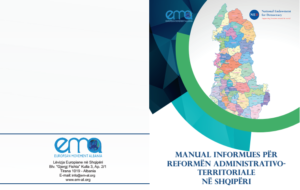 Building bridges–A new cooperation culture between local institutions and their communities (2016-2017) a project funded by National Endowment for Democracy, seeks to provide sufficient, simplified information about the advantages, as well as possible negative side-effects of the Territorial Administrative Reform; establish a permanent and continuous dialogue between  local communities (citizens, NGOs, media, scholars) and political and technical officials of municipalities; and create the legal instruments that guaranties the inclusion of citizens in the local policy and decision-making processes.

In  framework of this initiative EMA staff and its experts have worked on publishing an Informative Manual about Territorial Administrative Reform in Albania, its challenges and innovations. The chapters found on the Manual are as follow:

2-Why is needed such Reform in Albania?

3-Shared experiences and comparison with other countries of the region

5-Challenges and innovations TAR will bring

6- Which is the role of the citizens in decision-making process?