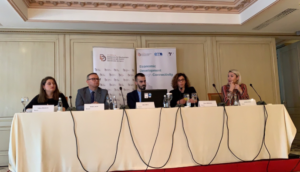 Democracy for Development Institute (D4D),  launched the paper “Connectivity for Development: Taking the Highway for Economic Growth”, a research with focus in Kosovo, Albania and Serbia. The research was prepared in cooperation between D4D, European Movement in Albania and Transconflict Serbia, with the support from the European Fund for the Balkans (EFB).

The paper seeks to enlighten the complexity of Berlin Process, especially the Connectivity Agenda.

Valëza Zogjani, Policy Researcher at D4D, emphasized that operating in a region that is still suffering the consequences of the recent conflicts of the late 1990s, political rivalry between states and bilateral disputes, difficulties and economic barriers applied between states certainly do not facilitate the implementation of the goals of this Agenda, which is to achieve trust among the people of the region through key points that enable their cooperation growth, at least the economic one, through investments in interconnection infrastructure.

“But of course, the Connectivity Agenda is also affected by the unequal level of development of the countries, the low level of state capacity of participating states to implement soft and strong infrastructure measures, negatively affect the maximal benefit of this Agenda”, said Ms. Zogjani

Mona Xhexhaj from European Movement in Albania said that while we are talking about Albania, Connectivity Agenda projects are in different stages of implementation and somehow in line with specific implementation deadlines. However, she emphasized that some of the challenges that are slowing down the process of advancing projects are the administrative capacities and the compliance with mandatory technical standards.

Dritero Arifi, university professor, stressed that the Berlin Process did not achieve the expected objectives. “Without regional reconciliation, this cannot be the proper agenda for the Berlin Process. This has not happened, and it can be addressed as a failure of the European Union”, said Mr. Arifi.

Meanwhile, Donika Emini, Researcher at Kosovar Centre for Security Studies (KCSS), said that the Berlin Process is a political process, which Kosovo should have benefited to the maximum, since it is the only process where Serbia couldn’t block.