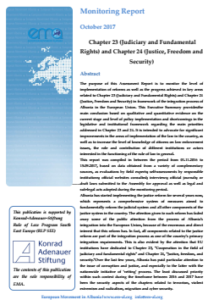 The purpose of this Assessment Report is to monitor the level of implementation of reforms as well as the progress achieved in key areas related to Chapter 23 (Judiciary and Fundamental Rights) and Chapter 24 (Justice, Freedom and Security) in framework of the integration process of Albania in the European Union. This Executive Summary provides the main conclusion based on qualitative and quantitative evidence on the current stage and level of policy implementation and shortcomings in the legislative and institutional framework regarding the main priorities addressed in Chapter 23 and 24. It is intended to advocate for significant improvements in the areas of implementation of the law in the country, as well as to increase the level of knowledge of citizens on law enforcement issues, the role and contribution of different institutions or actors interested in the functioning of the rule of law in general.

This report was compiled in between the period from 01.11.2016 to 15.09.2017, based on data obtained from a variety of complementary sources, as evaluations by field experts; self-assessments by responsible institutions; official websites consulted; interviews; official journals; or draft laws submitted to the Assembly for approval as well as legal and sub-legal acts adopted during the monitoring period. Albania has started implementing the justice reform for several years now, which represents a comprehensive system of measures aimed to fundamentally reform the judicial system and all other components of the justice system in the country. The attention given to such reform has faded away some of the public attention from the process of Albania’s integration into the European Union, because of the enormous and direct interest that this reform has. In fact, all components related to the justice reform are part of the integration process as one of the country’s primary integration requirements. This is also evident by the attention that EU institutions have dedicated to Chapter 23, “Cooperation in the field of judiciary and fundamental rights” and Chapter 24, “Justice, freedom, and security.”

Over the last few years, Albania has paid particular attention to the issue of corruption and justice, and especially to the latter with the nationwide initiative of ‘vetting’ process. The least discussed priority within such context during the timeframe between 2016 and 2017 have been the security aspects of the chapters related to terrorism, violent extremism and radicalism, migration and cyber security.