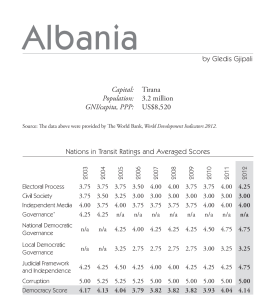 Freedom House has published the annual report “Nations in Transit 2012“ which  analyzes the progress’ level of Albania in terms of democratization in important areas such as: National Democratic Governance; Electoral Process; Civil Society; Independent Media; Local Democratic Governance; Judicial Framework and Independence; and Corruption, areas which are crucial to the fulfillment of the Copenhagen political criteria. It is the fifth consecutive year that EMA research staff works with Freedom House to produce this report.

Nations in Transit is Freedom House’s comprehensive, comparative study of democratic development in 29 countries from Central Europe to Eurasia. Findings in Nations in Transit 2012 suggest that the countries that have achieved the greatest democratic success since the Cold War’s end are now displaying serious vulnerabilities in their young democratic systems. Over the past five years, stagnation and backsliding is evident in key governance indicators across the new EU member states and countries of the Balkans. In the Balkans, critical reforms stalled in nearly all countries in 2011.