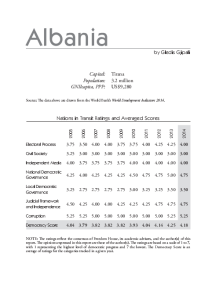 Freedom House has published the annual report “Nations in Transit 2014” which analyzes the progress’ level of Albania in terms of democratization in important areas such as: National Democratic Governance; Electoral Process; Civil Society; Independent Media; Local Democratic Governance; Judicial Framework and Independence; and Corruption, areas which are crucial to the fulfillment of the Copenhagen political criteria.

It’s the 18th edition of Freedom House’s comprehensive report on post-communist democratic governance–highlights recent setbacks to democracy across Eurasia and the Balkans, as well as in Central Europe.Albania’s national democratic governance rating improves from 5.00 to 4.75 and Albania’s electoral process rating improves from 4.25 to 4.00. Russia Leads Eurasia’s Break from the Democratic World. Corruption increased in Central and Eastern Europe in 2013, with half of the 10 assessed European Union (EU) member states receiving downgrades.

Nations in Transit 2014 is Freedom House’s comprehensive, comparative study of democratic development in 29 countries from Central Europe to Eurasia. The overarching conclusion is that of the 29 countries assessed in 2013, 13 were rated as democracies, 6 as transitional regimes, and 10 as authoritarian regimes.As in every year for the past 10 years, the average democracy score declined in 2013, with 16 countries suffering downgrades, 5 improving, and 8 not registering any score change. The Balkans registered some positive developments during the year, including Croatia’s EU accession and a historic agreement between Kosovo and Serbia, but dysfunctional governments continued to drive down democracy scores in the region overall.