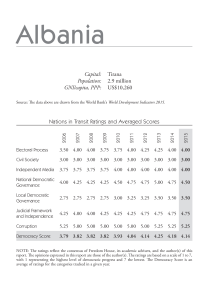 Freedom House has published the annual report “Nations in Transit 2015” which analyzes the progress’ level of Albania in terms of democratization in important areas such as: National Democratic Governance; Electoral Process; Civil Society; Independent Media; Local Democratic Governance; Judicial Framework and Independence; and Corruption, areas which are crucial to the fulfillment of the Copenhagen political criteria.

It’s the 19th edition of Freedom House’s comprehensive report on post-communist democratic governance–highlights recent setbacks to democracy across Eurasia and the Balkans, as well as in Central Europe. Albania’s national democratic governance rating improves from  4.75 to 4.50 and Albania’s electoral process rating remains unchanged  to 4.00. The overall score of Albania’s democracy is 4.14.

The democracy scores and regime ratings are based on a scale of 1 to 7, with 1 representing the highest level of democratic progress and 7 the lowest. The 2015 ratings reflect the period January 1 through December 31, 2014. Nations in Transit is the only comprehensive, comparative, and multidimensional study of reform in the former Communist states of Europe and Eurasia. Nations in Transit tracks the reform record of 29 countries and administrative areas and provides Freedom House’s most in-depth data about this vast and important region. The 2014 edition covers events from January 1 through December 31, 2013.