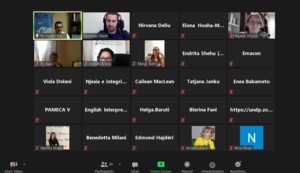 In the framework of the National Convention on European Integration 2019-2021, the Ministry of Justice and the European Movement in Albania (EMA), in partnership with the Slovak Foreign Policy Association (SFPA) and with the financial support of Slovak Aid, organized on June 18, 2021 the Session 3 of WG I – Chapter 23 (Judiciary and Fundamental Rights). The topic of the session was focused on the role of stakeholders in the negotiations for EU membership , highlighting the Slovak experience.

Gledis Gjipali, Executive Director of EMA welcomed the participants and emphasized the relevance of this topic for Albania. He gave more details about the European Integration Partnership Platform (EIPP) and praised the co-operation with the Ministry of Justice. Moreover, Gjipali provided an overview of the reforms, the role of civil society and the media in the accession negotiation process as topics to be discussed by the panelists.

Elona Hoxha, Director of the Directorate of Policies and Strategies in the Field of Justice of the Ministry of Justice declared that the Ministry, as the leading institution in preparing and coordinating the negotiation process for Chapter 23 and the Political Criterion has the responsibility to advance the process of harmonization of legislation with the EU Acquis. She confirmed that the legal framework of the justice reform has been published with almost all the bylaws and that the institutional structure is functional. Hoxha also added that a set of anti-corruption mechanisms have been established. Moreover, she mentioned the free legal aid project and other reforms that have laid the foundations of a sustainable justice system. The negotiation process requires the involvement of all stakeholders where civil society equipped with capacity and expertise will have to play a monitoring and advisory role. The Albanian government has created the EIPP  with the  aim to integrate all the interested actors. Hoxha recommended that Albanian institutions need to learn from the experiences of other countries that have succeeded in the negotiation stage. At the end of her speech, she informed that the Ministry of Justice has completed the draft- strategic package for the second phase of Justice Reform for the 2021-2025 period.

Radovan Geist, editor in chief of Euractiv.sk provided a short summary of Slovakia’s path towards European Union. He assessed that for a country like Albania, EU membership is the best of all available options but it is attached to a few irrational expectations for change. Chapter 23 is fundamental for the future development of public and political consensus on general support for EU membership. He then, comparing Slovakia and Albania’ case, highlighting that there are a few factors that make the Slovak experience irrelevant for Albania. Firstly, Geist emphasized that EU has strengthened the rule of law and changed the institutional architecture. He added that the political climate and the organization of the accession talks have changed. Europeanization is not a natural consequence of the accession process but it needs sustained internal support for these reforms. Geist stated that EU membership is not an end in itself but a catalyst of positive transformation. Albania needs to increase the independence of judicial institutions and target corruption. Furthermore, he talked about the relevance of media and emphasized that reporting from “home is more important than reporting from “Brussels” when it comes to the accession process.  Geist also analyzed the general media crisis and adding that membership cannot solve most of these problems.

Open discussion: The questions were raised about the role of media and the political influence in the negotiation process, the country’s benefits from EU membership and the necessary recommendations to avoid Slovakia’s mistakes.

You can find the full activity here: WG I, Session 3