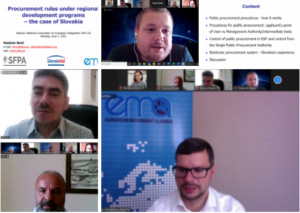 On June 7, 2021 EMA and ADF in partnership with SFPA and with the financial support of SlovakAid organized Session 4 of WG IV. The main topic was: “Procurement rules under regional development programs”.

Gledis Gjipali, EMA’s Executive Director welcomed the participants and emphasized the importance of this particular session in Albania’s EU integration process. This was the last session of WG 4 for NCEI 2019-2021. Gjipali summarized all the sessions held so far and praised the recommendations given for Albania under each chapter. They were about the challenges of Chapter 22, strengthening administrative capacities, drafting long-term strategic documents, anti-corruption measures and unifying the priorities of regional and economic development.

Ermal Ilirjani, the head of the Programming Unit at Albanian Development Fund (ADF) said that the procurement procedure is an important component of the Regional Development Operational Program and Cohesion. He pointed out that this model provides implementation space for entities that have benefited from state budget until now. The EU model sees municipalities, communities or the civil society as implementers, giving them more responsibility in concrete projects. Ilirjani mentioned that public procurement according to the EU example brings a set of rules that require capacity building.

Florian Xhafa stated that regional development is one of the most relevant elements covered by Chapter 22 of the EU Acquis. Albania as a candidate country benefits from the IPA program and within the framework of the agreement EU refers a few regulations. Xhafa explained that although for this chapter our country is not formally required to transpose the acquis, the introduction of these regulations in Albania is a necessity. Moreover, he said that all development programs have three steps: 1. Programming process 2. Monitoring and reporting process and 3. Evaluation process.

Vladimír Benč, the Slovak expert began his presentation by explaining the basics of public procurement (PP) procedures. He said that Managing Authorities and Intermediary Bodies have strengthen their monitoring measures as corruption is most prevalent in the initial stages of the process. Benč provided an overview of Slovakia’s case as one of the first European countries where PP-related legislation was adopted. Furthermore, he explained that public procurement is centralized and that a special state administrative office is established for all the necessary documentation. Benč also spoke about the national electronic public procurement system which publishes all the data and information for the stakeholders. The Managing Authority checks compliance with the principles of PP by respecting equality, non-discrimination, transparency and economic efficiency. Benč said that public procurement controls are done to ensure a fair distribution of funds by the public administration according to EU rules and in accordance with the Grant Contract. The first control (first ex ante control) is conducted before PP is published whereas the following one (second ex ante control) before a contract is signed with a successful tenderer. The third one (standard ex post control) is done after PP has been subject to the second one. Lastly, a control of amendments is done in case of irregular changes in the contract regulations.  Benč also talked about the indicators that may leave room for corruption such as: conflict of interest, illegal merging of contracts, accelerated procedures, tender requirements that tend to favour a concrete tenderer, low number of applicants, changes made immediately after signing the contract, etc.

Open Discussion: The main questions were raised on how to differentiate the national and European system in EU member states for public procurement, different methods of PP selection in EU and Albania and general problems that can occur in this process.