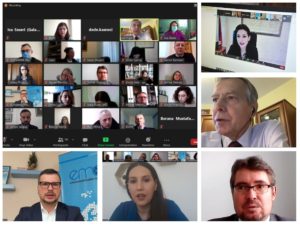 The Ministry of Justice in Albania and the European Movement in Albania (EMA), in partnership with the Slovak Association for Foreign Policy (SFPA) and with the financial support of the SlovakAid, held a virtual conference on 5 February 2021 on “Negotiations for Albania’s membership in the European Union and regional experience – Chapter 23 in focus”. This activity was conducted within the framework of the National Convention on European Integration 2019-2021. The event was co-moderated by the Deputy Minister of Justice, Mrs. Adea Pirdeni and the executive director of EMA, Mr. Gledis Gjipali.

Mrs. Adea Pirdeni introduced the agenda and the speakers, highlighting the topics that will be discussed to create a more complete overview of this complex and dynamic process. She continued her speech by emphasizing that cooperation with EMA is quite relevant in these initiatives where the expected discussions will differ from the other similar activities, as the speakers will try to explain the technical elements of the integration process with a special focus on Chapter 23 offering regional, European as well as national expertise.

Mrs. Etilda Gjoni, Minister of Justice of the Republic of Albania welcomed the participants and expressed her appreciation about this activity. She initially stressed the importance that the Ministry of Justice has as a leading institution in preparing and coordinating the negotiation process for Chapter 23 and harmonizing the national legislation with the EU Acquis. Mrs. Gjoni asserted that the Albanian government is focused on building the right legal and institutional infrastructure to ensure the rule of law in Albania. The Judicial reform has completely changed the Albanian judiciary and the establishment of specialized anti-corruption structures has contributed to the fight against non-punishment. With regards to Chapter 23 and the initiatives that protect fundamental rights and freedoms, the focus of the Ministry of Justice has been on creating and strengthening a new system for providing free legal aid. Mrs. Gjoni also praised the international partners who have contributed to building and training the capacities that provide this legal service and providing their expertise on Albania’s path to the EU.

Mr. Gledis Gjipali, Executive Director of EMA expressed his contentment in co-organizing this activity and gave details about the importance of Chapter 23 in the integration process. He thanked the participants and explained that this is the second event out of a series of sessions to be held in the framework of the International Convention on European Integration with a focus on chapter 23. Mr. Gjipali said that the Convention has been successful in the Balkans and similar results are expected in Albania.

Z. Ján Figeľ, former European Commissioner and former Chief Negotiator for Slovakia’s Accession to the European Union, expressed his appreciation for this activity and stated that he was willing to give his contribution to the entire process. Mr. Figel’ gave a brief explanation of the EU enlargement history and added that Balkan countries should try to adapt and learn from the challenging situations that EU has faced in the past. He mentioned peace and globalization as two of the main reasons that these countries should integrate in EU. Mr. Figel’ said that as part of the union Western Balkan countries can strengthen the 4 core values mentioned in the Lisbon Treaty: human dignity, freedom, equality and solidarity. Furthermore, the Madrid Criteria was mentioned as a continuation of three Copenhagen requirements which emphasize the administrative capacities for the European agenda. He added that Albania should work harder and establish good relations with neighbouring countries as part of preparations for integration. Mr. Figel’ provided a lot of examples illustrating Slovakia’s integration process and cited various academic papers to demonstrate the importance of this process.

Mr. Sofjan Jaupaj, Chief of Cabinet of the Chief Negotiator of Albania with the EU presented the speech of Mr. Zef Mazi, who found it impossible to participate in the event. He explained the role that the chief negotiator has in this process and the motivation and commitment to carry out this responsibility as successfully as possible by cooperating with all the Albanian and European actors.
Mr. Tomas Strazay, Director of the Slovak Foreign Policy Association (SFPA) Research Centre expressed his appreciation for this event and put emphasis on the goals and achievements of the Convention on European Integration. The platform was implemented for the first time in Slovakia and because of its successful outcomes served as an example for Western Balkan and the Eastern Partnership. Mr. Strazay stated that this Platform provides an opportunity for the Slovak and European experience to be shared with candidate countries in the framework of the EU integration process.

Mrs. Fjoralba Caka, former Deputy Minister of Justice and at the same time an expert on European Law made a more technical and specific presentation on the negotiation process under Chapter 23, the structures and capacities needed to obtain optimal results and emphasized the achievements that the Ministry of Justice has done within the framework of the screening process and the Partnership Platform for European Integration. Mrs. Caka said that the priorities put forward for Albania, a few of which are included in this chapter are quite relevant.