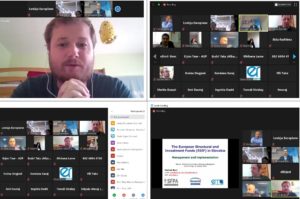 On October 23, 2020, the European Movement in Albania (EMA), in cooperation with the Albanian Development Fund (ADF) and Slovak Foreign Policy Association, in the framework of the National Convention for European Integration 2019-2021 supported by SlovakAid organized Session I of Working Group 4: Chapter 22. The topic of the activity was: “Challenges of Albania under Chapter 22 and fund management of European Union”. Working Group 4, thanks to the experiences of experts, is evaluating issues related to the process of implementation of the national IPA program and the management of EU funds from Albania; negotiations with the EU under Chapter 22; programming and implementation of financial programs with special attention at the national and regional level. An important element is the European Structural and Investment Fund, how it works, what are the main challenges it faces and what are the lessons learned from the Slovak experience.

Mr. Gledis Gjipali, The Executive Director of EMA, opened Session I for Working Group 4 of the Convention. The National Convention of European Integration has been applied for over 15 years in various countries where some of them are part of the EU such as Slovakia where this project has been implemented for the first time. The Convention is also currently being implemented in Serbia, Montenegro, North Macedonia where it is required to have good dialogue and cooperation between institutions and interest groups who want to participate in this platform. The Convention main aim is the European integration of the country where is implemented. In Albania, it was EMA who has implemented the Convention, which has started in 2016 with the 1st session of the Convention targeting many areas, but not that of regional cooperation which is being covered for the first time in this edition of the Convention. The convention aims to bring roundtables with new information, good practices and a process of extensive consultation where it is possible to invoke expertise, national and the Slovak one.

Mr. Florian Xhafa, internal expert of the Convention presented an overview of Albania on regional development issues and the EU assistance programme. Mr. Xhafa’s presentation was focused on 3 main issues:

In terms of European Union funds, he pronounced that the EU is the largest donor in Albania. The instruments for pre-accession assistance to the European Union are known as IPA and the annual program for financing the country is estimated at up to 459 million Euros for the years 2007-2013 (IPA 1) and 639.5 million Euros 2013-2020 (IPA 2) The funds are distributed respectively by pillars: Democracy and Governance (32.6%), Rule of Law and Fundamental Rights (20.9%), Climate Change in Energy (4.7%,), Transport (3.8%), Agricultural Development (20.6%), Education and Social Policies (9.4%). Most of the donations provided by IPA 2 have been invested in Chapters 23 and 24 including the Justice Reform. On the other hand IPA 3 is expected to be implemented during 2021-2027. Albania also participates in other European Union funded programs, such as “Western Balkan Investments Framework”, “ERASMUS”, “Finance Crossborder” and cross-border programs. In terms of fund management, there are 4 types of managements, but the most commonly used are: direct management by the contracting authority of the European Commission; Indirectly  by International Organizations through Delegation and Agreements; and Indirect Management with Albanian institutions. In Albania there is also a program for the rural area and a management and financial authority – IPARD.

Mr. Vladimir Benč, Slovak expert for Chapter 22 under NCEI introduced a presentation with detailed information on the ESIF Management System in Slovakia as well as on the Integrated Regional Operational Program 2014-2020. He also presented a brief history of his country, Slovakia and its related experience with the management of European Union funds. Slovakia drew 1.219 billion Euros from the overall allocation of 1.169 billion Euros. This constituted 103.93%. Additional resources from the Cohesion Fund were 509.7 billion Euros. The National Development Plan (NDP) of the 2004-2006 programming period, while respecting the sustainable development, ensured the GDP growth that the Slovak Republic will have achieved a level exceeding 50% of the average GDP in the EU countries by the year 2006. The programming documents for the year 2014-2020 include three levels: EU level (The common strategic framework, ERDF, ESF, CF, EAFRD, EMFF); National level (The partnership agreement ERDF, ESF, CF, EAFRD, EMFF) and National or Regional level (Operational Programs under the ERDF, SF and CF; Rural development programs (EAFRD) and Operational Programs for EMFF). In the presentation he stated that after a country joins the European Union a considerable number of ESIF funds will grow eventually and the country will have the full support of the EU. He also presented some of the key problems and challenges of Slovakia, regarding regional policy and the solutions in order for Albania to benefit from the Slovak experience, such as huge regional differences in unemployment; troubles in using EU funds because of corruption, capacity problems because of the new institutional setup; centralization of decision making regarding ESIF funds and wasting of money because of non-consistent policymaking. Mr. Benč mentioned 2 case studies of Operational Programs: 1. IROP and 2. Rural Development Program. IROPs global objective is to contribute to the promotion of the quality of life and to ensure sustainable provision of public services with impact on balanced and sustainable regional development; as well as economic, territorial and social cohesion of regions, cities and municipalities; the protection and maintenance of high nature value of agricultural and forestry areas. He also explained Programming, Partnership and Management and how they work. In terms of accession to the European Union, Benč stated that the first step that Slovakia took before accession was the negotiation process. Almost everything that Slovakia did, had to be approved by the European Commission. Coordination between chapters was also very important.

You may watch the activity on YouTube in this link: https://youtu.be/FPD6lWGPCrE