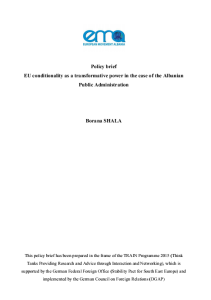 EMA has the pleasure to share with you the Policy Brief: “EU Conditionality as a transformative power in the case of the Albanian Public Administration”.

This policy brief has been prepared in the frame of the TRAIN Programme 2015
(ThinkTanks Providing Research and Advice through Interaction and Networking), which is supported by the German Federal Foreign Office (Stability Pact for South East Europe) and implemented by the German Council on Foreign Relations (DGAP).

‘The future of the Balkans is within the European Union’ , is the main message given during most  of the  speeches  of  EU  representatives  and national politicians  in  the  enlargement  countries.  This  region  experienced  devastating  civil  wars  fought  along  ethnic lines  after  the  fall of respective countries’ communist regimes  and  is now  undergoing  a  transition  to  consolidated democracy.  Therefore,  the region was and still remains dependent  on EU support  to implement EU reforms  meeting the political, economic and social  conditions  introduced by  Brussels,  which  aims to  influence  by  the means  of  a ‘transfer  of  given  EU  rules  and  their  adoption by non – member states’.

The Western  Balkan  countries  are not  performing  well  regarding  the  implementation  of  the  requested reforms.  In Albania, for example, the belated transformation of the country may be  caused by different factors, such as the burdens of the communist past,  the  scarce  capacity of  central  institutions ,  and  the absence of policy entrepreneurs.

The  domestic  institutions  of  Albania suffer  from  democratic  illegitimacy  and  clientelism  which lead to the  incomplete fulfillment of  the  Copenhagen Criteria that every country which  aspires  to  EU membership should fulfill.  The  Copenhagen  Criteria  comprise the political and economic  criteria  and  the  institutional  and  administrative  capacity  to  implement  the  acquis .

The  experience  of  the  Western  Balkans  shows  that  the  lack  of  complete  statehood,  a  politicized and  corrupt   administration,   a   clientelist   system   and   the   absence   of   policy  entrepreneurs  prevents  the  necessary  reforms  driven  by  the  transformative  power  of  the  EU  through the principal of conditionality.

T he  reform  of  the  public  administration  in  Albania  is  crucial  in  the  fulfillment of  EU  demands.  It has been one of the main conditions to obtain candidate status and it is part of the  five k y priorities for the opening of accession negotiations with  the  EU. Public  administration  reform remains one  of  the  most  important  EU  conditions for  Albania ,  since  one  of  the  prime  reasons  for limited  compliance  with EU  requirements  is  the limited capacity  of  the  public  administration ,  due  to  clientelism  and  corruption . EU conditionality  encounters  limits  in  an  environment  where  the  actors  are  not  fully  committed  to  reform  and  where the institutional capacities constrain the effectiveness of the required reforms.

In  order  to  better  understand  the  effectiveness  of  EU  conditionality in the  Albanian  reform process , we will  study  the   case   of   the   reform   of   Albanian   public  administration,  in  light  of  the  EU  integration  process  of  the  country. In  this  regard,  the  question  that  arises  is whether EU conditionality is working in the case of the Albanian public administration reform. According  to  Schimmelfenning: ”The  dominant  logic underpinning   EU   conditionality   is   a   bargaining  strategy  of  reinforcement  by  reward,  under  which  the EU provides external incentives for a target government to comply with its conditions”.

The  first   part   of   the   paper   reviews   the  initiatives   undertaken  as regards Albanian   public  administration  reform.  The  second  part  studies  the  case  of  the  adoption  of  the  new  Civil  Service Law, a key factor  in this reform. The paper concludes by giving a number of concrete  policy recommendations for the actors involved in the Albanian public administration reform