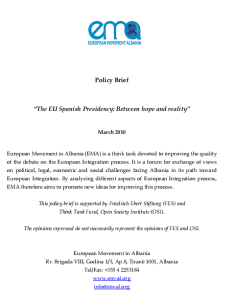 EMA has the pleasure to share with you the policy brief : “The EU Spanish Presidency: Between hope and reality” supported by Friedrich Ebert Stiftung (FES) and Think Tank Fund, Open Society Institute (OSI).

Since the first of January 2010, Spain leads the EU. This is the fourth time that Spain holds the steering wheel of the EU machinery. Spain differs from other EU Member States, especially big ones, as it has always found it difficult to reconcile its status as number one recipient of European aid with its position as a large state with global interests1.

The Spanish Presidency has a complex agenda, which includes a series of issues inherited from the Swedish Presidency such as addressing the economic crisis, the issue of global warming as well as climate change. From this perspective, the Spanish Presidency will play a facilitating role in the EU transition to a new stage of strategic planning of European policies. On the other side, the EU should be considered lucky to be lead in this moment by Spain, a country which disposes of a qualified administration experienced in the management of European policies.