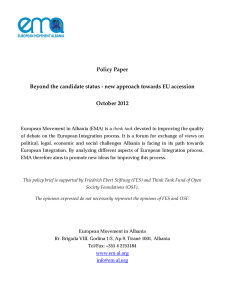 EMA has the pleasure to share with you the policy paper: “Beyond the candidate status”,  supported by Friedrich Ebert Stiftung (FES) and Think Tank Fund of Open Society Foundations (OSF)

On 10 October, the European Commission published the Enlargement Strategy 2012-2013, along with the Progress Reports for candidate and potential candidate countries. The Progress Report conclusions, for Albania were particularly important, since for two consecutive years, in the 2010 Opinion and 2011 Progress Report, the country had been denied the EU candidate country status. Therefore, European Movement in Albania (EMA) has analyzed possible scenarios for the country’s candidate status and also what shall follow next in Albania’s journey towards EU accession.

Unlike previous years when progress on some priorities were almost non-existent and in others very limited, the year 2012 Albania is in a much more favorable situation. The political agreement reached in November 2011 between the ruling majority and the opposition paved the way towards achievement of the 12 EC key priorities. The political dialog following the November agreement led to some tangible results, such as the adoption of the electoral reform, the election of the Ombudsman, the adoption of important pieces of legislation which required qualified majority voting and the adoption of constitutional changes to restrict immunity of high officials. However, still remain unresolved issues related to other priorities such as: proper functioning of Parliament through the amendment to its rules of procedures; strengthening the rule of law and the adoption of important laws regarding the justice system; fight against corruption and organized crime accompanied with convictions; politicization of public administration; as well as the guarantee of property rights.

Taking into account this context, EMA considered  two scenarios for the Commission to recommend candidate status for Albania:

EMA Policy Paper: “Beyond the candidate status – New approach towards the EU accession