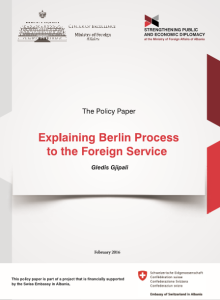 EMA has the pleasure to share with you the Policy Paper: Explaining Berlin Process to the Foreign Service conducted by Mr. Gledis Gjipali, Executive Director of EMA as part of a project financially supported by the Swiss Embassy in Albania.

This paper aims to explain the political, economic and social context of the Berlin Process and  outlines the impacts that the Berlin Process has in the regional cooperation, which is an EU key conditionality for the Western Balkans countries, and the role that Albania is playing along this process.

The methodology used in this policy paper is based on the identification and the analysing of official documents, political initiatives and commitments regarding the Berlin Process and their respective effect. And consists of interviews conducted with national actors working on the Berlin Process initiatives such as governmental institutions, youth and other relevant actors.

The paper analyses the public speeches, political and joint statements, and the press releases from the Western Balkan countries and EU.

The first part of the paper presents the origins of Berlin Process and its development until the beginning of 2016. This is followed by a presentation of the political, economic and social context of the process and the initiatives that have been undertaken in the respective fields.

Then, it reviews the impacts that this process has on strengthening the regional cooperation between the Western Balkan countries. The paper also explains the role that Albania has taken in this process and  gives recommendations on how the country can strengthen its role and become the leading regional country.

Finally, conclusions are made in order to underline the most important pillars of the Berlin process and its benefits. The conclusions are followed by recommendations on how the regional countries and Albania in particular should benefit from this momentum to advance their EU agenda.

The “Berlin Process” is a new initiative that aims to gather the Western Balkan countries around regional projects as means to deepen the regional cooperation and accelerate the EU integration process of the region. This five-year process serves as a platform of dialogue between the Western Balkan leaders and between the region and the EU. It is also a platform where different projects in the field of infrastructure, energy, and youth are initiated in order to enhance the connectivity and strengthen the regional cooperation. These projects will also have positive impacts in boosting the economy of the region, which is a crucial factor to the stability and the EU integration process. Berlin Process, which started only as a conference in August 2014 in Berlin, is now a five year process that serves as “a bridge between the Western Balkans and the EU”2. The Berlin Conference was followed by a Western Balkans Summit in Vienna in August 2015, which expanded the Berlin agenda. The next hosts of this process will be France in 2016 and Italy in 2017. Moreover, the Berlin Process will serve as a road-map for the countries of the region in their journey towards the EU integration process.