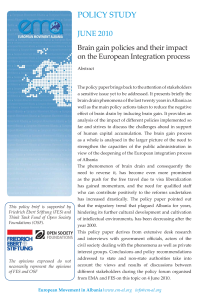 The policy paper brings back to the attention of stakeholders a sensitive issue yet to be addressed. It presents briefly the brain drain phenomena of the last twenty years in Albania as well as the main policy actions taken to reduce the negative effect of brain drain by inducing brain gain. It provides an analysis of the impact of different policies implemented so far and strives to discuss the challenges ahead in support of human capital accumulation. The brain gain process as a whole is analysed in the larger picture of the need to strengthen the capacities of the public administration in view of the deepening of the European integration process of Albania The phenomenon of brain drain and consequently the need to reverse it, has become even more prominent as the push for the free travel due to visa liberalization has gained momentum, and the need for qualified staff who can contribute positively to the reforms undertaken has increased drastically. The policy paper pointed out that the migratory trend that plagued Albania for years, hindering its further cultural development and cultivation of intellectual environments, has been decreasing after the year 2000. This policy paper derives from extensive desk research and interviews with government officials, actors of the civil society dealing with the phenomena as well as private interest groups. Conclusions and policy recommendations addressed to state and non-state authorities take into account the views and results of discussions between different stakeholders during the policy forum organised from EMA and FES on this topic on 4 June 2010.