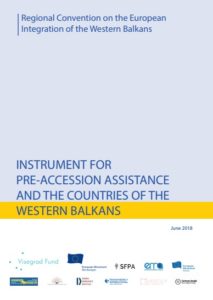 This study was produced within project ”Fostering the partnership between V4 and WB and capacity building in Western Balkans “, implemented by the European Movement in Montenegro, European Movement in Serbia, European Movement Albania, EUROTHINK – Center for European Strategies Skopje, Kosova Democratic Institute, Transparency International Bosnia and Herzegovina, EUROPEUM, Institute for Foreign Affairs and Trade, Research Center of Slovak Foreign Policy Association and Center for Analyses of the Jagiellonian Club.

This particular study was conducted within the Fostering the WB6-V4 Partnership and Capacity Building in Western Balkans project, which was based on the already existing Regional Convention on European Integration of Western Balkans platform. One of the two main issues this project is focusing on, relates to assessing capacities and achievements of the 6 WB countries regarding the absorption of IPA funds, with main emphasis on IPA II, or the 2014 – 2020 period. This issue was addressed by conducting a comprehensive research on IPA II absorption in all 6 WB countries, by using the same approach and methodology.

Below you may find the full publication for all of Western Balkans countries and the one for Albania.