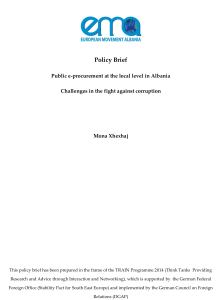 Ema has the pleasure to introduce with the policy brief prepared in the frame of the TRAIN Programme 2014 (Think Tanks Providing Research and Advice through Interaction and Networking), which is supported by the German Federal Foreign Office (Stability Pact for South East Europe) and implemented by the German Council on Foreign Relations (DGAP)

The guarantee of the rule of law remains one of the key criteria for Albanian accession to the European Union. One of the hallmarks of a society governed by rule of law is the fight against corruption and the increase of transparency.  Transparency is an important principle of the EU’s legal framework, and it is the common understanding that a public procurement regulation based on transparency prevents corruption.

To overcome the lack of accountability and transparency in public procurement, Albania became one of the first countries in the world to introduce in 2009 a fully electronic procurement system for all public sector tenders above the threshold of 3,500 Euro