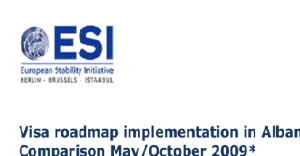 EMA has the pleasure to share with you the “Scorecard on Albania’s Progress Towards EU Membership During 2011“, published in the framework of the project “Debunking the EU integration process” supported by the British Embassy in Albania.

The Scorecard considers as starting point the situation described in the Analytical Report of 2010 and reflects the development over a year, crystallized in the Progress Report of October 2011. Despite being the most important documents to assess the progress of Albania, they are commonly neglected by the public because of the technical language used. Thus the only information available for the public comes through the political lens of the political actors in the country.

The Scorecard aims to present in a more readable language the three chapters of the progress report: 1) political criteria, 2) economic criteria, 3) ability to assume the obligations of membership. It provides an assessment for each subfield of each chapter, by offering at the same time a comparison between the situation analyzed in the Opinion and the EC Analytical Report 2010 and that of the Progress Report 2011. It also focuses on the Stabilisation and Association Agreement (SAA) as the most important contractual document between the EU and Albania.

The assessment includes a concise description of the progress achieved during 2011 in each area as well as an assessment grade (where A is the highest grade and F the lowest one). The assessment takes into account the terminology used by the European Commission in the documents (“no progress”, “insufficient progress”, “limited progress”, “partial progress”, “some progress”, “progress”); frequency of their usage combined with the relevance of the issue (e.g. new legislative initiatives or strategies are considered more relevant than routine training or modest improvements in administrative capacities). The methodology applied by EMA offers a snapshot of different components shaping subfields, fields and chapters.

The “Scorecard on Albania’s Progress Towards EU Membership During 2011″ in Albanian language which aims to assist students, journalists, researchers, public administration and other actors nurturing an interest on the Albania’s European path.