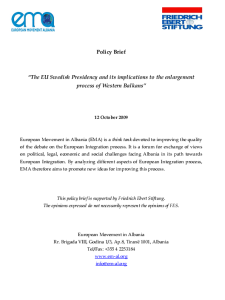 EMA supported by Friedrich Ebert Stiftung (FES) has prepared a policy brief on “The EU Swedish Presidency and its implications to the enlargement process of Western Balkans“, which were published during the policy forum with the same title held on 16 October 2009.  The priorities of the EU Swedish Presidency, the ratification of the Lisbon Treaty by Ireland in referendum and the latest developments on the European Integration process of Western Balkan countries are the main incentives for developing this policy forum.