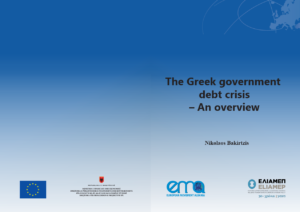 This publication is produces thanks to the cooperation between European Movement in Albania (EMA) and the Hellenic Foundation for European and Foreign Policy (ELIAMEP) as part of the project: “Deliberating Socio-Economic Impact of EU integration – Albanian case and regional experiences”. It is conducted within the IPA funds of EU and with the support of Central Finance and Contracting Unit (CFCU) together with the Ministry of Finance and Economy.

This research paper examines the Greek debt crisis during 2008-2014 by elaborating thoroughly the role of internal actors such as: the government, the opposition, the Greek society and also the impact of external actors including: European Union and other involved institutions known as Troika. The main aim is to reflect on the conditions and obligations brought by EU integration and the contradictions between domestic and European interests a Member State can face.