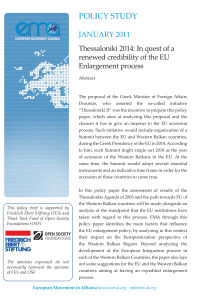 EMA supported by Friedrich Ebert Stiftung (FES) and Think Tank Fund of Open Society Foundations (OSF) has prepared a policy brief : “Thessaloniki 2014: In quest of a renewed credibility of the EU Enlargement process”.

The proposal of the Greek Minister of Foreign Affairs Droutsas, who asserted the so-called initiative “Thessaloniki II” was the incentive to prepare this policy paper, which aims at analyzing this proposal and the chances it has to give an impetus to the EU accession process. Such initiative would include organization of a Summit between the EU and Western Balkan countries, during the Greek Presidency of the EU in 2014. According to him, such Summit might single out 2018 as the year of accession of the Western Balkans in the EU. At the same time, the Summit would adopt several essential instruments and an indicative time frame in order for the accession of these countries to come true.