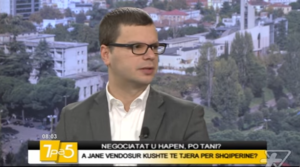 On 15 December 2016 Mr. Gledis Gjipali, the Executive Director of European Movement Albania, was invited on a TV programme to discuss about the Opening of Negotiations of Albania with EU, and also about the following procedures that need to be taken. Asked why there is still not a fixed date, Gjipali highlighted that Albania still hasn’t accomplished all the conditions such as the judicial reform and the vetting law, therefore we are aware that the EU won’t give any further step if we do not fulfil our duties. According to him after the opening of negotiations, there are other important steps that we need to encounter such as the opening of the chapters. “The importance of the date relies on the fact that after it, the country enters in a new irreversible phase, or at least this is what has happened with the majority of the countries of the region. The opening of negotiations is important because the process is intensified to the small details by assessing all the primary elements,” he concluded.