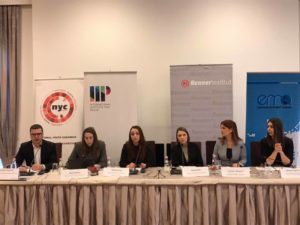 The International Institute for Peace (IIP), Austria in collaboration with the Austrian Institute for International Affairs, Karl-Renner Institut, European Movement Albania and the National Youth Congress organized a public event on Friday, 7 February in Tirana. The public panel event was moderated by Executive Director of European Movement in Albania Gledis Gjipali, and the panel featured Aulonë Memeti (ADMOVERE), Anja Jokić (National Youth Council of Serbia), Stefani Spirovska (Youth Educational Forum), Maja Bjeloš (Belgrade Centre for Security Policy), and Dafina Peçi (RYCO). Swoboda introduced the “Yougn Generations for the New Balkans” initiative and the “Vision 2030” policy paper. He emphasized the need to give a voice to the younger generation and bring these voices to EU politicians to ensure that the interests of young people are considered throughout the integration process.

First on the panel, Memeti discussed Kosovo-Albania relations, highlighting disagreements over the Mini-Schengen initiative and ongoing border issues in the region. Peçi spoke about the role of young people in European integration in the Western Balkans and the need to promote a more comprehensive understanding of the process. She emphasized the need for interaction in economic, social, and political sectors to create a more prosperous and resilient society in the region, citing the role of RYCO in such projects, but noted the continued weakness of democratic systems in the region and the need to develop a coherent, shared vision for the future.

Spirovska discussed educational reform in the Western Balkans, highlighting weak education systems, emigration, and brain drain as the key challenges that young people currently face. As a means of redress, she noted the responsibility of the media to cover more positive, youth-oriented stories, the need to encourage young people to participate more actively in politics, and the guarantee of EU accession as a means to deter brain drain. Jokić focused on the inclusion of young people in decision-making processes, underlining the need to change current narratives and the democratic necessaity of youth participation. As good practices, she cited the ongoing EU youth dialogue, projects by the National Youth Council of Serbia, online platforms for structured dialogue, and conversations held by Serbian Prime Minister Ana Brnabić with young people.

Bjeloš spoke broadly about geopolitics in the region, focusing on competition between China and the US, the rise and fall of the global human rights agenda, the impact of technological change, and the rise of right-wing governments in the Western Balkans. She also discussed the role of foreign actors in the region, noting in particular the difference the EU and the influence of actors such as Turkey, China, Russia, and the Gulf States, which have differing priorities on the rule of law, human rights, gender, and youth inclusion. There is no clear vision among the Western Balkan governments beyond their current mandates, and thus young people do not see a future in their own countries. She concluded that a new style of leadership with a new vision alongside a renewed emphasis on the rule of law, improved security, an independent judiciary, and accountability to the citizenry are required.

Questions after the presentations focused on Serbia-Kosovo relations and the recent announcement of a direct flight between Belgrade and Priština, the challenges of emigration, the role of history in the region, and the need for transitional justice.