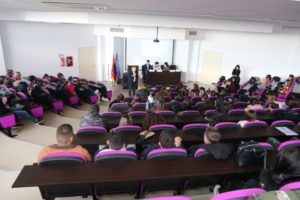 On framework of the project “Deliberating socio-economic impact of EU Integration- Albanian case and regional experiences”, which is being implemented by European Movement in Tirana (EMA) in collaboration with ELIAMEP (Greece) with the support of General Directorate for Financing and Contracting (CFCU), Ministry of Finance and Economy under the EU IPA Funds, took place on 28 January 2020, at University of Durrës “Aleksandër Moisiu” the activity “Enlargement in the EU: Comparison of the Albanian experience on the European Integration process with that of Greece, Bulgaria and Romania”.

This activity had a significant interest and participation from students of this university. Part of the panel was the Dean of Political-Judicial Sciences of UAMD, Prof. Assoc. Dr. Andon Kume. In his opening remarks Dr Kume underlined the importance of public awareness related to EU Integration as a socio-economic reform incinerator and the promotion of our country Europeanization, specially among students. Mr. Gledis Gjipali, Executive Director of EMA, did a short presentation of the project, followed by Dr. George Siakas, whom is working since 2015 as Research Director at Public Opinion Research Unit, University of Macedonia, Greece, specialized on Public Opinion and Policy Researching.

Dr. Siakas brought as example the Greek experience on EU Integration process. Furthermore Dr. Siakas deepened in the role that the public opinion plays in the enlargement process. He continued the analyze with the changes that the public opinion has had during years related to the EU enlargement in different countries. He mentioned interesting facts on how the EU integration of Albania is perceived from countries which already are part of the EU. The data gathered from polls show that only 30% of European public opinion supports Albania’s accession in the EU, while 58% are against it. For Mr. Siakas an important element is also the remain part (almost 10%) which are undecided and in cases of a positive image can be oriented towards pro Albania’s EU accession. Regarding countries where the citizens are more supportive about Albania’s accession those are the new European countries as Croatia and Romania, but also Southeast European countries such: Slovenia, Poland, Hungary and also Sweden. The public opinion of founding countries of EU from the other hand is against this accession and the most against are the Austrian citizens, followed by German, Belgian and Italian. This is an interesting fact cause we are able to see that there is a ‘clash’ in between what the public opinion wants and what the elites promote in these countries, for example it is clear that countries as Germany or Italy, are from those countries where their leaders have offered full support and are aiming acceleration of Albania’s progress in the EU.

In the end Ms. Nirvana Deliu Policy Researcher at EMA , presented a paper authored by Dr. Dimitar Bechev on the project framework. This paper is focused on the process of integration of Romania and Bulgaria, by analyzing the process with the aim to bring out some lessons for Albania and the EU. Regarding Romania and Bulgaria the integration process has been sui genneris compared with that of other member states of EU, this because the accession was companied with a Collaboration and Verification Mechanism (CVM) which would monitor the progress made from those two countries in priority spheres considered still problematic: fight against corruption, fight against organized crime and Justice reform. This mechanism – as a condition post accession even though it was in force until 2019, it didn’t had the desired effect because Romania and Bulgaria didn’t showed the right motivation to realize complete and meaningful reforms. A second lesson which can be pulled out/learned from the accession process form Bulgaria and Romania is the fact that political elites cannot be the only decision maker actor, but also other sectors of society, starting from the civil society, media and citizens must be involved and contribute to this process. Third, it is important also the EU recommendation related to the funds offered to the aspirant countries to be put in use and as conditions or sanctions when aren’t meet the EU standards.